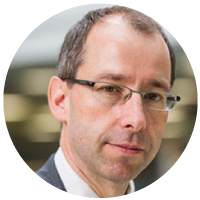 Global Head of Infrastructure at KPMG

Richard has over 25 years’ experience in infrastructure policy, governance, strategy and financing, advising both public and private sector clients in the UK and overseas.

Richard began his career as a civil servant at the UK Department for Transport where he held positions in the road, rail and aviation directorates. He was Private Secretary to the Secretary of State for Transport and the Deputy Prime Minister. He subsequently moved to the Infrastructure Advisory team at Citigroup before joining KPMG, where he led the UK Infrastructure, Building and Construction sector until 2018.

Richard clients include national and local infrastructure and transport authorities, private infrastructure owners and promoters of infrastructure schemes. He has advised on the governance and financing of some of the worlds’ most complex civil engineering projects.

Richard has a long-standing reputation for leading clients through complex and politically high-profile transactions and providing strategic, financial and governance advice in relation to the delivery of infrastructure services and projects.

Richard is Vice President and Fellow of the Institution of Civil Engineers. He is a Commissioner on the International Development Infrastructure Commission established by the UK government’s Secretary of State for International Development. He is a member of the World Economic Forum Global Future Council on Infrastructure and the Forum Coalition for Climate Resilient Investment. He is a member of the Infrastructure Board of the Confederation of British Industry. He chairs the Advisory Council of The Infrastructure Forum, which is an independent think-tank which brings together organisations with involvement in UK infrastructure from public, private and regulatory perspectives. As a prolific writer on infrastructure and transport, Richard is quoted regularly in the trade and national press.

Synopsis - A New Reality for Construction

As the world emerges from the battering of Covid-19, how do we grasp the opportunity to return to something better than we had before? If we are going to rebuild the world, we need to rebuild it on a basis that is sustainable, and delivers quality of life for everyone, everywhere. So now is the time to ask ourselves, what can the construction, infrastructure and project management professions do both to reform our own industries, and to contribute to building a New Reality for our communities? Richard will share his own thoughts, insight from conversations around the world, and seek to stimulate a discussion covering construction industry reform, the Net Zero imperative, and the future of the transport and energy industries in particular.