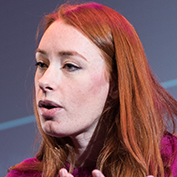 Hannah Fry is a mathematician and broadcaster. She is a lecturer in the Mathematics of Cities at the Centre for Advanced Spatial Analysis at University College London. As well as her university work she is a regular presenter of science and maths programmes on BBC TV and radio.

Having specialised in fluid dynamics, Hannah worked briefly in Formula 1 aerodynamics before returning to academia. At UCL she works with physicists, mathematicians, computer scientists, architects and geographers to study the patterns in human behaviour - particularly in urban environments – to answer questions from shopping habits to transport to riots. Beyond life in a city, she also considers the maths of the everyday; how numbers and formula can explain behaviours, predict patterns and reveal the truth behind commonly held myths.

Hannah takes unusual examples of how data and models are used in everything from locating serial killers, the analysis of fertility in cows, and predicting malarial water sources. She uses these illustrations to examine how data is collected, used, how reliable it is and what its limitations are. Beyond the abstract, she also considers customer data and how companies like Airbnb and Uber use in their data. She also reveals the difference between a nerd and a geek.

Hannah’s TED speech and book The Mathematics of Love reveals the stats behind romance from when to compromise to the odds on finding love, and it lasting. She returned to the idea with the BBC Horizon episode How to Find Love Online.

On television, Hannah has explored Climate Change By Numbers, recounted the story of computing pioneer Ada Lovelace in Calculating Ada: The Countess of Computing, and looked at how a million people at any point in time are travelling by plane in City in the Sky. She also co-hosted BBC Four’s Trainspotting Live and The Joy of Data. On radio, she’s appeared on Computing Britain, Can Maths Combat Terrorism, on the Radio 1 show Music by Numbers, and co-hosts (with geneticist Adam Rutherford) Radio 4’s The Curious Cases of Rutherford and Fry.