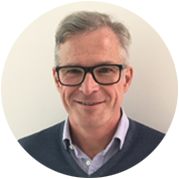 Stuart has been project management director systems since 2014. The primary responsibility in this role is to improve the standard of project, programme and portfolio management across the company, and to this end, Stuart has led the introduction of many new corporate PM capability assets aimed at achieving improved consistency across the enterprise.  He is also very active in reviewing projects as part of the company assurance process.  Stuart is also a member of the BAE Systems Corporate Project Management Council (CPMC).

Stuart has three University Degrees: a BSc in electronic engineering, an MSc in telecommunications and an MBA.  He is also a chartered engineer, a Fellow of the Association for Project Management (APM) and holds the Project Management Institute (PMI) PgMP qualification. Recently Stuart was appointed as an Honorary Professor in Project Management for Manchester Business School.

Stuart’s career started in Telecommunications engineering in 1985. He then joined GECMarconi, Military Displays as an electronics engineer in 1989 and progressed into project management. In 1998, Stuart was appointed as business unit director with responsibility for managing the factory and the overall business. Following the merger of BAE and GECMarconi in 2000, Stuart moved over to Germany as the joint (with EADS) MD for the Eurofighter Flight Control System JV. In 2003, Stuart was appointed as the systems delivery director for Typhoon and then in 2005 he moved back to Germany to work within the EF GmbH consortium as Programme VP for the Tranche 1/MDC contracts and then later for the Tranche 3 contract. In 2011, he moved back to the UK as programme director for the BAE Systems work content on the F-35 Lightning II and in this role was responsible for delivery of all contracts and for securing future development activity. He was also the head of the project management function, PMA and product safety manager for F-35.