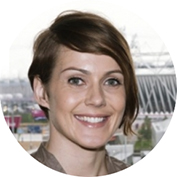 Kelly is a three time Olympic medalist, World and European medalist and Commonwealth Champion at heptathlon and 4x400m. She was an elite athlete for over ten years and retired shortly before the London 2012 Olympics due to a severe back injury. Since her retirement, Kelly has worked in various media outlets covering sport and topical issues within sport.

Kelly is passionate about athlete welfare and fair processes and most recently founded the British Athletics Athletes Commission. In 2015 she was elected onto the IAAF Women’s Committee and has now been selected to be on the IAAF Gender Leadership Taskforce. Kelly has an interest in athletes rights and views and is a board member of the SPTT (Sports People Think Tank) which raises issues from sportspeople which is researched by top academics and the recommendations are then given to NGB, most notably the BAME issue within football which has seen us under a yearly parliamentary review with the relevant bodies associations. Kelly is currently studying her MSc in Sports Directorship at The University of Salford Business School.