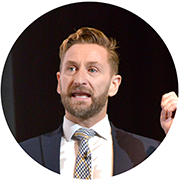 Matt Lindley is a serving airline pilot and former RAF pilot who applies his experiences in leadership, accountability and culture to the business world. After a brief spell at Ford dealing with culture and management strategy change, Matt joined the RAF. Serving with the Air Force for over a decade he piloted fast jets before specialising in VIP transportation as well as training programmes. Moving to commercial aviation, Matt joined Britain’s flag carrier airline flying 747s on routes to the US and Asia.

Matt’s experiences in military and commercial flight have given him an insight into the human factors of performance and culture, and the way organisations view blame and error. In aviation, mistakes are rare, but when they happen they have the potential to be huge. A combination of ever-improving safeguards and an open culture that analyses the causes of errors rather than apportion blame has proved to be an example of good practice to organisations of all types.

Additionally, Matt’s experiences as a gay man in the armed forces has informed a key part of his view of organisational culture and leadership. The RAF are a world-class, elite team, and demand the utmost professionalism and focus from their pilots. Matt realised that the stress of keeping his personal life secret from his colleagues held him back from performing at his best. When the military’s rules on openness about sexuality changed he encountered support, loyalty and empathy from his commanding officer – a stark contrast to his predecessor.

Matt’s experiences with the RAF allow him to understand the balance and interdependence between the personal and the professional. He also looks at the importance of good leadership, a supportive culture, and an understanding of aspects of mental health. In addition to his flying Matt has worked extensively with the NHS and the private sector on human factors and error management.