With an increasing demand for NHS services as the population ages, it’s important that frontline staff such as doctors and nurses have as much time with patients as possible. That’s easier said than done, however – a lot of time is spent on mundane, repetitive, administrative tasks.

As a result, NHS trusts are turning to innovative, technology-driven ways to get around the restrictions and deliver more value to patients. East Suffolk and North Essex NHS Foundation Trust (ESNEFT), for example, has delivered almost £2.1m a year in cost savings and 60 weeks of staff time through its artificial intelligence (AI) and automation project – and that’s just in one hospital.

Darren Atkins, chief technology officer for AI and automation for the trust, oversaw the project as a way to save time by removing certain tasks from human workers and onto AI. The principle measure of success, he says, was time saved. “If we could free up time for our corporate and clinical staff to spend more time with our patients, that’s got to be a good thing to do. In the first month alone, we released about 300 hours. About 14 months later, we’re doing 4,500/5,000 hours a month. So you can see how we’re starting to receive some really good benefits.” 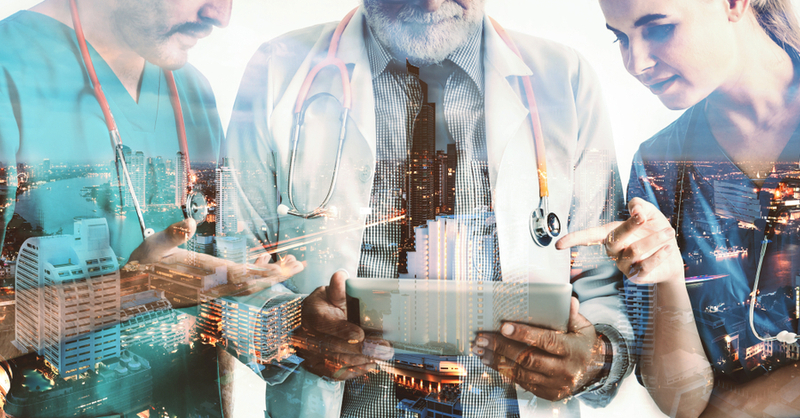 ESNEFT has around 10,000 staff serving a wide population across East Suffolk and North Essex. A lot of staff were working long hours, more than they are contracted to do (“A lot of the NHS runs on goodwill.”). A lot of that time was being spent on mundane, repetitive tasks that had little to do with the treating of patients. Atkins set up a small innovation team to see if AI and automation could be used to ease the pressure.

“That was a real driver for us: what is this new technology? Is it really as good as we think it is? And should we try to explore whether it can really bring some value? This technology platform was never about saving vast sums of money or cutting headcount – it was about freeing up the time to allow our staff to do the right thing for our patients.”

There was little expertise or resource in-house, so the first stage of the project was to find a technology that wouldn’t require a number of IT professionals to build a system around it. Budgets were already tight, and Atkins was keen to start delivering benefits as soon as possible. Eventually he settled on a platform called Thoughtonomy, which was hosted in Microsoft Azure – meaning it could work with existing systems. “We were up and running within three days.”

The fact that Thoughtonomy was ‘software as a service’, with rolling monthly fees, made it attractive from a budgeting point of view as well. “If it didn’t deliver any value, we could just switch it off and stop paying for it.”

Alongside the technology research, Atkins and his small team went out into ESNEFT’s hospitals to observe what staff were spending time doing and to ask them what tasks took them away most from treating patients.

This stage was important for keeping stakeholders engaged and allaying any fears or skepticism of the technology. Beyond that, however, it helped Atkins’ team create a plan for a set of processes that would genuinely benefit frontline staff.

“When products like these are built solely between the IT team and the finance team, they don’t deliver any value whatsoever, because they don’t get the engagement.

“We’re right out at the coalface. What we do is we observe how staff are working, we see some of their challenges, and in a collaborative way, we start to develop these processes. So IT and technology experts go out into the wider hospital community and engage with staff that way.”

With initial research complete and the technology in place, Atkins’ team started building processes. Despite the engagement work they had done around the organisation, there was still some skepticism as to whether the technology could really deliver what it promised.

The first processes were created around invoicing, then the team automated GP referrals. It wasn’t long before frontline staff were seeing the benefits of the technology. Suddenly, Atkins was getting requests for different processes from all over the organisation.

“The closer you go to the coalface, the more you engage with people who are dealing with the patients, dealing with the back office corporate services, the richer ideas you get that can deliver more benefits.”

To ensure that kind of openness, Atkins made sure that what the technology actually did was very transparent to staff across the organisation. If a ‘robot’ has accessed a medical record or made a change in the system, there is a clear record of those changes.

One of the teams’ biggest successes was around outpatient appointments – the team automated appointment cancellations via text message. It saved the Trust £2.1m a year, as it was utilising a higher rate of clinic slots.

Atkins has been conscious not to add too many KPIs to his automation project – the focus has always been on time saved for frontline staff, and continues to be so.

“All the secondary factors are linked into existing KPIs, but what I’ve been really clear not to do is to create a massive industry in measuring these things...If we’re doing our job right, in the existing way we’re measuring the organisation, you should see a dramatic improvement, and we have done in a number of areas.”

Atkins and his small but growing team continue to identify processes to help doctors, nurses and other frontline staff at ESNEFT spend more time with patients. “I’m very fortunate to work with a board that’s very forward-thinking,” he says. “They also understand this technology has more benefits it can bring to the trust. In many ways, it was a calculated leap of faith, but because the investment isn’t large sums of money it was almost worth the gamble.”

Thankfully, that gamble has paid off, largely due to Atkins’ ‘stakeholder first’ approach to implementation. “The first priority was always to create that culture of it being seen and used as a supportive technology to help our staff. I think that’s why it’s been so successful.”

Stakeholders – engage or manage? You decide!

Five insights on the future of the project profession

I chaired an excellent panel discussion at Manchester with great questions from the conference floor, which got our big conversation for Projecting the Future started. Here are five key takeaways.