The Honorary Fellows’ Lunch has once again brought together a group of the most esteemed project professionals as part of an annual tradition celebrating newly-appointed APM Honorary Fellows and the achievements of the profession.

This year the event was indeed a day of both celebration and remembrance as attendees looked back on a journey which has lead to APM receiving its Royal Charter from Her Majesty the Queen.

Recognising the efforts of Honorary Fellows who have supported APM since its inception over forty years ago and who have contributed their time and effort towards the goal of APM achieving Chartered status, APM President David Waboso commented:

“While it has been a long process to get to this stage, we are honoured that we work in a profession that has achieved this level of recognition in a single generation. The Honorary Fellows’ Lunch gives us an opportunity to celebrate the achievements of the profession with many of those who have made APM what it is today and, in particular, those who have contributed more than their fair share to the achievement of the Charter.”

As well as looking back at the huge strides the profession has made over the years and remembering members and associates who are no longer with us, guest speaker Nick Borwell, Director of the Project Delivery Profession, Infrastructure and Projects Authority, looked towards the future reflecting on the challenges faced by major projects in Government, including new initiatives and how developing capability in people and methodologies would help drive the profession forward.

The lunch took place at the Marriot County Hall Hotel, London on 8 February 2017. A full list of APM’s Honorary Fellows can be found here.

APM was pleased to welcome the following Honorary Fellows: 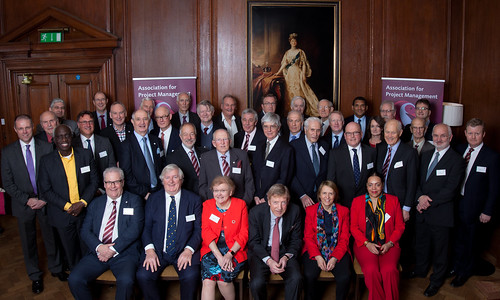