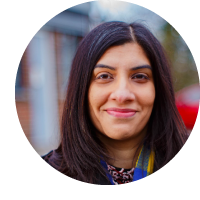 Anita Phagura is the founder of Fierce Project Management, a movement to empower women and underrepresented groups in project management so that projects are delivered better with diverse leaders. She is a dissenter who challenges the status quo to put humanity, and equity at the heart of projects and beyond. As a project manager for over a decade in railway and construction this has led to challenges! Yet Anita fiercely champions and advocates for women so that they are heard and that they belong so that project outcomes are better.

Having worked as a project manager for more than a decade in male-dominated industries, mostly within railway and construction, Anita was used to being the only woman in the room. After becoming a manager, she started to notice how gender was relevant around here – as well as the lack of senior female role models to help navigate the path. She realised most women she spoke to in the profession had their own story of how their gender meant a harder road with more obstacles. Acknowledging too that women who are underrepresented far too often face greater challenges.

Fierce Project Management was formed in 2019 on the back of research collected by listening to 100 women working in project. Recognising the value of community, Anita created the Fierce Project Management Tribe as a networking community for project professionals. Now she has a successful membership community, and Mastermind coaching programme to enable women to stand in their own shoes as fierce project leaders.

Presentation: Embracing the misfit to make a difference: how we can switch the message to create cultures of belonging

Ever felt you didn't “fit in around here”? As a woman in project management, particularly as a “different” woman, we will hear messages about how we are "too much" or "not enough" and should mould ourselves to fit in. This doesn't just effect women of course, men also will hear messages of how they should be to “fit in”. In this interactive session, we explore how to think differently about those who “miss-fit” so that we embrace difference to create cultures of belonging. Now is exactly the right time to think differently for better project outcomes.