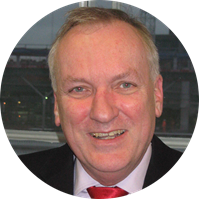 Charles has been playing leading roles in major construction projects and business change initiatives in the rail sector since 1997. His earlier career was spent in project management, principally in oil and gas construction in the Middle and Far East. He is an advocate of collaborative working for driving value generation throughout the supply chain and within client organisations.

Charles has  been committed to the development of project management practice for a number of years. He has  judged in the APM awards on four occasions, been on the writing team for the APM Body of Knowledge 7th edition and has been a member of the Assurance Specific Interest Group (SIG) committee.

Outside of APM, his contributions include being a member of the Cabinet Office Trial Projects Working Group, judging in the Constructing Excellence national awards for five years and chairing their Procurement SIG.

Charles left London Underground in 2017 as head of stations renewals and enhancements. Since then he has worked for CPC Project Services (an APM Corporate Partner) as a programme director.