With an estimated total cost of £14.5 billion and a peak workforce of 14,000 people by 2013, Crossrail is Europe's largest construction project and the biggest ever to be procured by NEC3 contracts. Work started in May 2009 and is due for completion in 2018. The central section through London includes 21km of new twin-bore rail tunnels, eight new sub-surface stations, shafts for ventilation and escape, provision of all necessary railway systems and a mainline train fleet allowing 58 peak-period services along its overall 118km route. NEC3 contracts are being used to procure all central section works and systems requirements. 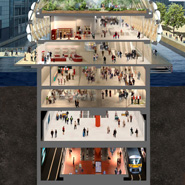 Achieving excellence
According to Steve Rowsell, Interim Head of Procurement between 2008 and 2010, "Crossrail's approach to procurement is aligned with the UK government's achieving excellence in construction principles, including a fair allocation of risk and reward, early involvement of the supply chain, minimising of interface risks, incentivising performance and selection of suppliers on the basis of best value.

Following a review of available contracts and les¬sons learnt from recent major projects, we decided to use the NEC3 suite because it supports the desired culture and way of working, provides robust contract management processes, achieves a fair and sensible allocation of risk and can be used for all project requirements to give consistency in approach.

Crossrail is a wholly owned subsidiary of Transport for London (TfL) and NEC3 contracts are also TfL's contracts of choice, being those considered most likely to achieve a suc¬cessful outcome", said Rowsell.

ECC, PSC and FC
A full range of NEC3 contracts are being used. Programme partner Transcend a joint venture of Aecom, CH2M Hill and Nichols Group is engaged under a £100 million NEC3 Professional Service Contract (PSC), and project delivery partner Bechtel is simi¬larly engaged under a PSC worth £400 million.

Three major tunnelling contracts worth £1.25 billion were awarded in 2010 under the NEC3 Engineering and Construction Contract option C (target contract with activity schedule). The largest of these for the eastern running tunnels, worth over £500 million, went to a joint venture of Dragados and John Sisk. A joint venture of Bam Nuttall, Ferrovial Agroman and Kier Construction won a combined contract for the western running tunnels and station tunnels, also worth £500 million. The third contract for the eastern station tunnels was awarded to a joint venture of Balfour Beatty, Vinci and Morgan Sindall.

The culture countdown for PMO leaders