This paper is a qualitative analysis of the use of masculine and feminine language in the Project Management Body of Knowledge (PMBOK), and the implications of this for ongoing professional theory in the field of project management. It was sponsored by the Organizational Behaviour Research Grant Program of the University of Calgary’s Faculty
of Management. 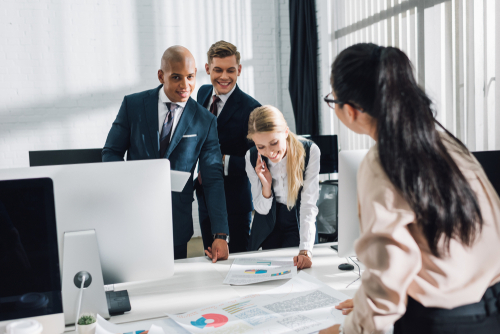 The authors investigate two contrasting types of language used in relation to project management, defined as

‘masculine’ and ‘feminine’. They look at what this vocabulary reveals about the mindsets and skillsets being applied.

Masculine vocabulary (masculine sensemaking) is associated with ‘hard’ approaches that are:

Feminine vocabulary (feminine sensemaking) is associated with ‘soft’ approaches that are:

The authors have used deconstruction to evaluate aspects of the language used in the PMBOK and identify whether a masculine or feminine mindset is being applied.

The research began with a review of publications on the theme of gender and work. This yielded two lists of words considered indicative of the masculine and feminine mindsets within project management.

Having identified the vocabulary, the authors then used ATLAS/ti software to scan and analyse text taken from the PMBOK (Section I and selected chapters from Section II). Rather than just quantifying the findings, they looked at each word in context and drew conclusions about its use and any implications of this.

The words identified in the literature review are set out in Table 1 in the paper. Masculine words include, for example, ‘control’, ‘get’, ‘influence’ and ‘plan’. Feminine words include ‘affect’, ‘coordinate’, ‘emerge’ and ‘share’.

The scanning and analysis of the PMBOK revealed that it contains both masculine and feminine vocabulary.

Masculine terminology occurs in relation to preconceived ideas about the scope and goals of a project and concepts of efficiency and risk. The masculine mindset sees project managers as detached agents applying logic and prescribed rules. Resources, including staff in the project team, are seen as tools to get the job done.

Feminine terminology, reflecting a more fluid and responsive attitude, is found in relation to such matters as responding collaboratively to changing circumstances, being sensitive to stakeholder expectations, tackling emergent realities and flexible goal setting. The feminine concept of leadership is that it can be exhibited by different people who may shine at different stages in the project.

While acknowledging the unavoidably masculine idea that a project must achieve its goals, the PMBOK recognises the idea of feminine ‘soft’ outcomes of projects, in terms of social, economic and environmental impacts, but also that feminine thinking can be problematic where multiple objectives come into conflict.
The PMBOK exhibits a strongly masculine approach to the idea of risk, describing how it is to be identified and controlled using preconceived methods. While this keeps projects on time and on budget, it also reduces the opportunity for creativity and innovation. If the failure to improve on preconceived goals is included in the concept of risk, a feminine approach becomes much more relevant.

The authors conclude that, to be fully effective, both men and women in project management require both masculine and feminine management skills.
The PMBOK does not suggest that either a masculine or a feminine approach is superior, but the authors did find that ‘best practice’ was more often discussed in masculine terms and that ‘softer feminine logic systems appear less influential and presumably less valued or trusted in the profession’.
On balance, less predominance was given to feminine skills that support creativity, innovation and the management of ambiguity and complexity.

Masculine language and approaches tend to be a feature of isomorphism, where established ideas remain unchallenged across a range of professions and are reinforced in the professional literature. By opening up a discourse about masculine and feminine language, and its implications, this paper invites new questions and encourages professionals to interrogate isomorphic attitudes.

Acknowledging and addressing the imbalance between masculine and feminine sensemaking would improve practice in areas requiring soft skills, such as motivating staff, networking, innovation, and adapting to change or uncertainty.

In 2003 we knew that the constructs ‘masculine’ and ‘feminine’, while useful, were nonetheless simplifications of gendered logic and behaviour. In 2018, substantial strides in gender scholarship continue to affirm this critique. This research aimed to challenge operational definitions of ‘project management’. So too, gender researchers continue to challenge operational definitions of ‘masculine’ and ‘feminine’, ‘man’ and ‘woman’. Incorporating their work can continue to enable deeper, more pluralistic understandings of implicit norms and logics governing the way project managers are socialised and deemed competent.