The paper presents the theoretical concepts of behavioural decision making in projects as three schools of thought:

The authors link the empirical research in project contexts and the theoretical foundations of behavioural decision making, and suggest future research avenues.

As the literature on behavioural decision making is fragmented, the authors conducted a systematic review to identify and pull together articles which study decision making in project contexts deliberately. Building on a framework previously suggested to organise the literature on behavioural decision making, the study organised the findings into three theoretical schools: reductionist, pluralist and contextualist, based on the underlying research philosophy. Some of the articles were between schools and therefore a ‘mixed school’ group was created. Once grouped, the authors analysed the articles according to three questions:

The schools differ in their assumptions of a ‘good decision’ and therefore their perception of the ‘problem’ with decisions or the decision process. This reflects the different philosophical foundations of the three schools.

Three schools of thought in behavioural decision making in projects 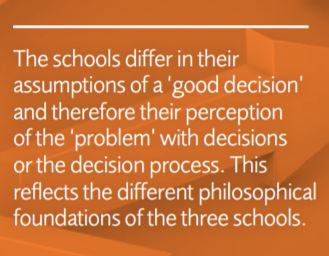 i) Reductionist school in project studies

The reductionist school builds on the canon of rationality: a rational decision exists and is ideal. In this view, decision behaviour is a deviation from rationality due to the limited and biased mind of individuals.

This school uses mostly quantitative methodologies to search for cognitive biases. The phenomena most commonly explored are escalation of commitment and optimism bias, both of which are widespread challenges in project organisations. Optimism bias is a particularly prevalent theoretical explanation for project decision issues related to overly optimistic forecasts or underestimation of risks. It is an umbrella term for a subset of various cognitive biases like self-efficacy theory, illusion of control, or outcome desirability.

The reductionist school also offers de-biasing strategies to foster forecasts that are more accurate. Through its strictly rational stance, this school provides limited value to decisions that are under high organisational and political influence, and when the ‘right decision’ cannot be defined, not even post-hoc.

Pluralist research similarly follows the notion of rationality yet identifies the sources of irrational behaviour in individual motivation. Overoptimistic forecasts in this school are attributed to the opportunistic behaviour of individuals and groups, who omit or even falsify information, or exploit information asymmetries and others’ biases to win project business, push personal ‘pet’ projects, maintain or better their position, or gain access to resources. Thus, pluralist research identifies the roots of this behaviour not in (fallible) individual cognition but in dynamics unfolding within the project and its stakeholders, sometimes fostering a dysfunctional environment. This can evolve to a climate in which organisational pressure suppresses the acknowledgement of ambiguity and uncertainty, leading to the development of ‘irrational objectivity’.

A second stream of pluralist research is concerned with negotiations, where failure to balance interests or the adoption of a strongly self-interested strategy can lead to ineffective
outcomes and can affect the (perceived) success of projects. Review of the pluralist school of thought reveals that research analysing the role of power asymmetries in project decision making is scarce, despite politicking and bargaining being a dominant issue in the reality of project practitioners.

The contextualist school breaks with the assumption that there is a single rational and ideal decision and stresses the relevance of the decision context. Using qualitative approaches, this research provides a process view rather than an analysis of the decision as an isolated event.

A key theme in the contextualist literature is the convergence of sense and meaning as an enabler for decisions that the group perceives as ‘right’ or successful. Specific drivers are the convergence towards a shared vision among the stakeholders, or a process of constant dialoguing among the project team. Consequently, the management approaches focus on steering and interpreting the sense making process.

The paper presents several case studies that propose how theories from the three schools can be employed to investigate core decision challenges, such as escalation of commitment and competing narratives. While articles in the mixed school present alternative explanations for behaviours in decisions, only a few articles explicitly acknowledge these different theoretical foundations. Yet, these ‘mixed schools’ papers hint at the potential of researching complex phenomena through multiple theories.

The authors discuss how significantly different philosophical concepts may create conflicts and be incommensurable if not treated and discussed with care.

Analysis of the literature reveals eight gaps in the research of the individual schools of thought:

Many of the theories explore, in (unnecessary) isolation, complementary aspects of the same phenomena, such as escalation of commitment or optimism, thus missing the opportunity to explore the full benefits of multi-paradigmatic research.

Future research should therefore aim to build bridges across schools of thought by acknowledging and positioning itself within the foundations and concepts of the different schools. It can do so by actively searching for potential overlaps between schools, while being aware of the potential incommensurabilities when attempting to bridge them

For project managers: the article contributes to making decisions by suggesting how behaviours impact project decisions and by reviewing coping mechanisms offered by
the literature.

For researchers: the review provides a structured mapping of the research against its respective underlying grand theories, thereby providing a tool for identifying gaps and missing links and suggesting avenues for future research.

This research started with the observation that project practitioners frequently report making decisions, from the sanction of the project to small day-to-day decisions, and yet, we, project scholars, dedicate limited attention to these decisions. So, we started to look at projects as a collection of decisions and an array of questions emerged:

We also noted the increasing amount of data available and increasingly sophisticated software used to collect and mine data in project contexts. Following this, we asked: