This paper recounts the project managed by Filippo Brunelleschi in 1420–36 to construct a dome for the newly built cathedral in Florence, Italy – an enormous technical challenge. Through best practice in a range of areas Brunelleschi brought the dome to completion within the desired time scale and budget. The authors summarise the features contributing to the project’s success and identify knowledge that is transferable to the present day. 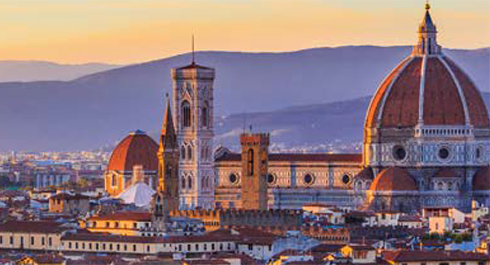 The authors are interested in the process of knowledge transfer from a historical project to contemporary practice. They have looked in detail at Brunelleschi’s project and have identified a number of factors that led to its success. These include ‘hard skills’ such as technical innovation, logical problem-solving, meticulous planning and sound strategy, together with ‘soft skills’ such as persuasion and diplomacy, effective communication and the ability to manage and motivate a workforce.

The authors reviewed relevant literature and visited both Florence cathedral and Brunelleschi’s source of inspiration, the Pantheon in Rome, to investigate the scope of the dome project, and how Brunelleschi managed the constraints and challenges involved.

Brunelleschi’s approach is recounted in detail, starting with his study of the Pantheon and his assessment of its relevance to the Florence project. His project management is explained in terms of technical innovations, organisational structure, people management, management of supply chains and budget, scheduling, risk management, and quality assurance.

Florence was the key financial and cultural centre of the unfolding Renaissance. The project to construct a landmark cathedral commensurate with its status was very nearly complete by 1367, save for a 42m-in-diameter gap where the dome should be. The Opera (works) committee was at a loss for an architect able to construct it. In 1420 Filippo Brunelleschi came forward with so persuasive a vision that the Opera commissioned him. The project had to be completed according to constraints in terms of time and budget.

Early stages of the project
Brunelleschi studied the Pantheon in Rome, constructed 1,300 years previously. Rather than adopting its techniques wholesale, however, he learnt from and adapted them.

As at the Pantheon, his foundations were in the form of a ‘drum’ to distribute the weight, and the dome was a self-supporting structure of stepped rings, with the fabric getting thinner as it rose towards an ‘oculus’ or opening at the top. Also, like the Pantheon, the dome had ‘tension rings’ to hold the structure in place. However, Brunelleschi decided to use light bricks and quick-drying mortar instead of concrete. He gave his dome a double shell of brickwork, and he built the scaffolding up in octagonal stages rather than using a more-costly option of centring it underneath. He also improved on Roman practice by setting up a carefully planned supply chain for materials and devising new lifting engines to move the bricks into place.

Main phase of the project
Brunelleschi appointed a separate team and manager to be responsible for each side of the octagonal dome. The workers were guildsmen from the ruoli, an official list of skilled craftsmen, and they were paid according to skill and risk, so, for example, those who worked at higher altitudes earned more.

Each layer of the dome had its own work platform – a ring of scaffolding that supported it and formed the base for the next layer – and had to be complete before the next was begun.

To keep costs under control without sacrificing quality, Brunelleschi used efficient techniques, such as the lifting engines as well as templates for the curvature of the dome. His planning took account of critical paths, for example with regard to supply chains, and he kept quality under constant surveillance: he was on site daily and ensured managers and workers checked their work.

Brunelleschi communicated well, took care of health and safety issues, and offered rewards for success – a banquet for the workers on completion of each layer. He was also astute: for example, he manoeuvred himself out of having to accept a deputy whom he deemed unhelpful (Lorenzo Ghiberti), and out of raising workers’ pay following a strike (by dismissing them and rehiring them).

The project’s legacy
Completed in 1435, Brunelleschi’s dome was acclaimed as a phenomenal success, and his masterpiece inspired other subsequent projects, including the domes of St Paul’s, London, and St Peter’s, Rome.

Directions for future research
The authors are currently collaborating on further research in relation to the relevance of historical projects to contemporary project management, and are working towards a planned publication provisionally entitled Managing Transformation Projects - Tracing Lessons from the Industrial to the Digital Revolution.

Brunelleschi’s project management had strengths in three main areas: technology, organisation and process. These relied on ‘hard’ and ‘soft’ skills, including deep understanding of the requirements and challenges of the project, technical expertise, sound strategic planning and skilful management. Brunelleschi excelled at adapting existing ideas to new contexts. He used novel technology. He managed people well and communicated clearly. He also had key personal qualities that included persistence, creativity, flexibility, sound judgement and attention to detail.

While many technical aspects of the project were specific to their time and function, Brunelleschi’s project management skills, especially soft skills as discussed above, remain highly relevant today.