This article challenges the belief that project organising is temporary.

It argues that most project organising is done by (relatively) permanent forms of organisation.

It also argues that the belief of its temporary nature has limited the development of research in this field. 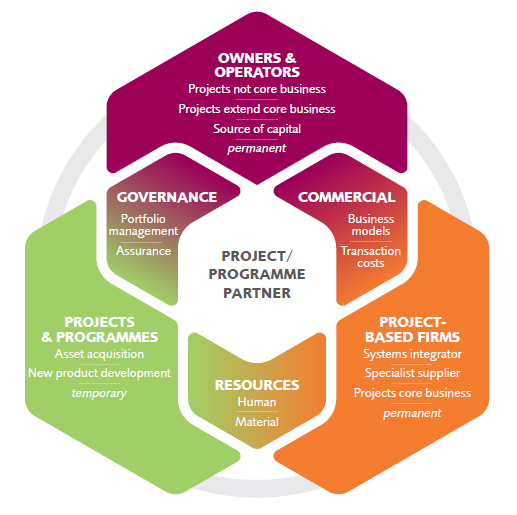 Conceptual framework of the three domains of project organising

The framework shows the three main organisational types in

the field of projects:

The arguments in this study were developed through a critical review of selected literature in three areas of project organising:

A brief summary of the literature review is as follows.

Project organising as temporary organising: The literature review on projects as temporary organisations shows that the concept is deep-rooted in academic research and is defined as such in the Project Management Institute’s Project Management Body of Knowledge. However, there are some studies that argue that the analysis should be extended to include attention to the interface of the project with its parent organisation.

In this article, Graham Winch uses the term ‘temporary’ to mean ‘determinate’: the project will be terminated at a pre-agreed point, which is agreed early on in the project life cycle by the involved parties.

Project suppliers: Owners and operators typically hire suppliers of project-related services, which are usually organised as permanent project-based firms. These firms bring skilled people together to work on tasks for a variety of owners and purposes. Projects are their core business, and it is important to realise how these firms fit into the framework.

This theoretical research study develops a conceptual framework of project organising (see page 1) as a combination of temporary and permanent organisations. The framework provides the basis for further theory development and future research.

This paper also identifies that, because the focus has mainly been on projects as temporary organisations, this has limited the range of research in this field. More research is needed in two areas: