The APM brand and identity is what people outside (and inside) the organisation use to form their opinions of the association. A strong brand reflects value to our members, customers and other stakeholders. The brand is more than just the logo; it is the words we write, the way we talk, how we present ourselves and any interaction we have with others. It is anything that influences how others feel about us.

The guiding principle of our branding policy is that APM logos, trademarks and copyrighted materials should only be produced in a way that avoids the risk of misinterpretation by the public.

APM retains the rights to all its copyrighted materials, trademarks and brands as well as the guidelines for their use. It retains the right to take necessary legal action where any apparent breach occurs.

APM serves the public benefit by encouraging the reasonable reproduction of APM copyrighted materials and trademarks. This will usually be authorised providing that the permission is sought in advance of its publication, that the source is acknowledged clearly and near to the cited text; this should include the name of the association, the title of the publication and the place and date of publication.

The exception to this rule is when the material is intended for a direct or indirect commercial purpose. In these cases explicit permission should be sought from the Association for Project Management in advance of their use. This permission will not be unreasonably withheld.

Unreasonable use includes the use of substantial sections of copyrighted materials, materials which wrongly imply endorsement by APM, thereby contravening the guiding principle, and the use of materials published in advance of permission being sought.

History of the brand

APM’s current brand identity was launched in spring 2005. The old blue and grey logo was replaced by the new red, purple and blue/grey logo type with the crested ibis icon.

The new logotype maintained many of the characteristics of the old brand, reflecting the history of the organisation. It maintained the lowercase APM and retained a derivative of the blue/grey colour from the original.

The inspiration for the crested ibis logo came from ancient Egyptian hieroglyphs. The crested ibis was the hieroglyph representing Akh, which in the world of the living was commonly used to refer to the “effectiveness” of kings or officials, who operated on behalf of their gods or kings respectively. Anyone could be akh-effective or do akhu-effective deeds.

In many countries the ibis is also a symbolic bird that represents resilience and courage, being the last creature to take shelter during a storm and the first to return – it signifies qualities of a good project manager.

Use of APM brands and trademarks by third parties

Organisations accredited by APM are permitted to use the appropriate APM Accredited logo. To avoid confusing the public, the logo should only be used in the context of the whole accredited activity.

The use of the logo for parts of the activity or related activities should be accompanied by a suitable strap line or descriptor to this effect. 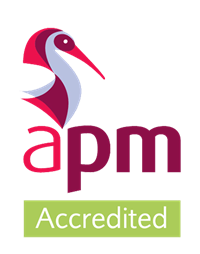 APM Training Providers have had their course materials assessed to meet APM standards and are permitted to deliver the APM project management qualification exams specified in their accreditation. 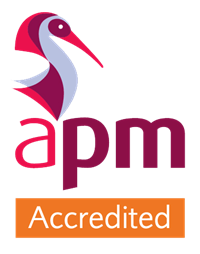 Corporate Accreditation assesses an organisation’s professional development scheme, providing confidence to all stakeholders of its dedication to developing project professionals. 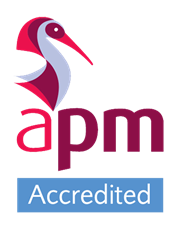 Academic Accreditation identifies courses and modules which are aligned to the APM Body of Knowledge. 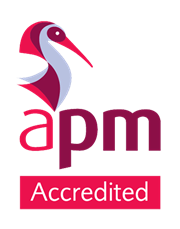 Professional Course Accreditation is designed to help learners choose the best course in support of their professional project management career.

The use of APM branch and SIG brands

APM branches and SIGs can use a series of pre-approved marketing templates.

APM seeks to operate with a careful balance of activity, blending voluntary and APM staff effort. However, it is important that APM staff take the lead when matters may involve third parties or involve any commercial activity. So please consult with your normal staff contact in such cases and liaise in advance regarding any possible use of APM branding or endorsement.

To assist with communications, APM provides wording for a standard sign-off footer for emails sent in a volunteer capacity.

Other usage must be pre-approved with the APM marketing department.

Members’ use of the APM brand

Members will not be allowed to use the logo on their personal or business marketing materials.

This is to avoid the impression that we endorse or recommend unrelated products and services.

Permission for our brand may be given if we have screened, or are directly involved in providing the service in question.

We encourage members to publicise their membership by including the appropriate letters after their name – MAPM, FAPM, HonFAPM.

APM members who are currently on the APM Register of Project Professionals are permitted to use the RPP logo and postnominal letters on their personal or business marketing materials as an endorsement of their professional status.

The RPP logo and brand should not be used to endorse or recommend unrelated products and services on behalf of APM or used to accredit a service that is not recognised by APM.

The use of the RPP brand on material intended for commercial gain is only possible when specific permission to do so has been sought and obtained from APM.

To ensure elements of the RPP brand are used consistently please follow these guidelines.

How do I request the logo?

Organisations and individuals should contact the APM marketing department. Permission will be granted upon a satisfactory proof of showing how the logo is to be used.

How do I use the logo?