As well as trends on salary and market conditions, the survey offers a revealing snapshot of the future trends likely to impact the project management profession. Like every professional discipline, changes in technology, particularly artificial intelligence (AI) and data analytics, will present new opportunities to improve and refine processes and learn new skills.

Encouragingly, the profession appears to be embracing and adopting new ways of thinking. The survey shows a growing number of professionals already incorporating data analysis into their project work. And in other areas too, such as climate change, there is evidence to suggest a profession facing up to unprecedented challenges and tackling those challenges with renewed positivity.

Key concerns for the future

Developing the workforce and climate change are at the forefront of people’s minds. Thirty-one per cent of all those surveyed put the issue of training, skills and development at the top of the list of challenges the profession may face over the next five years, with 60 per cent naming it as a significant concern. A close look reveals older respondents feel the people development challenge more keenly, with 34 per cent of 45-to-54-year-olds highlighting it, compared with 26 per cent of those two decades younger.

Climate change – and the effect it will have on the pipeline of new work – is a pressing concern as half of the respondents identified it as a significant challenge (25 per cent place it as the number-one challenge facing the profession).

Not surprisingly, grappling with the implications of the Fourth Industrial Revolution is a preoccupation for almost half (47 per cent) of respondents. As AI, automation, the internet of things and robotics edge into the mainstream, project professionals are well placed to embrace the new. 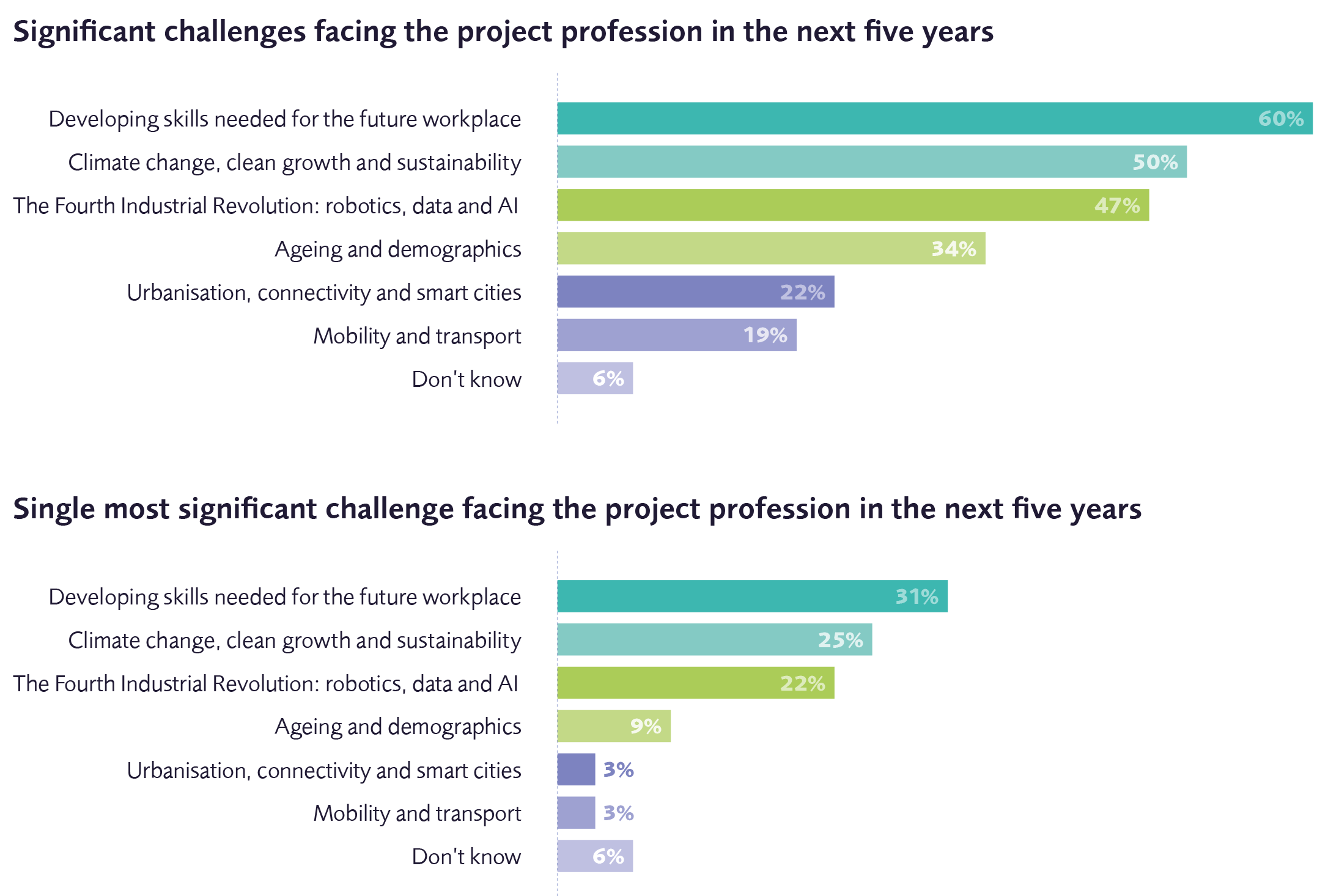 The most widely anticipated benefit of new technology is an increase in productivity (43 per cent), as well as the chance to focus on different types of work (42 per cent); a sizable number also expect the management of automated systems to become a regular part of their job (41 per cent).

Many respondents believe they will benefit from automation in particular over the coming years. Sixty-four per cent of those surveyed anticipate automation to be introduced widely across the profession, and 69 per cent express their belief that this will have a positive impact (only five per cent believe the impact will be negative).

In fact, one-third are already using automation in their projects to some or a large extent, while 33 per cent say they expect some aspects of their own job to be automated in the next five years. The current picture also shows that data analytics has been adopted most widely, with 60 per cent of respondents already using it to some extent in their work. However, a smaller proportion of respondents say they are using AI (16 per cent) or robotics (15 per cent). 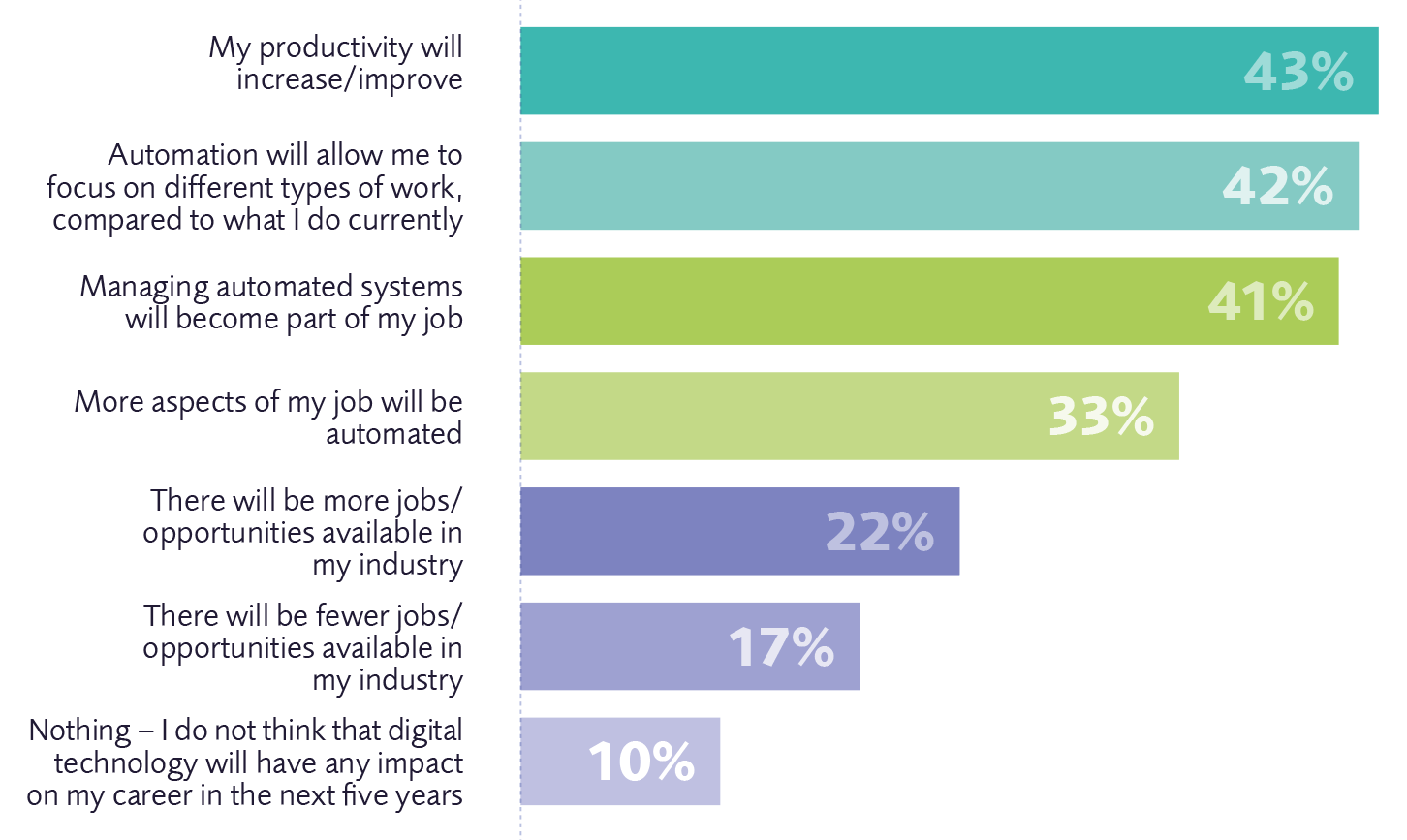 The project profession’s impact on society

Thirty-one per cent believe the best indicator of the profession’s societal impact is the extent to which project professionals can shape and define strategy in organisations, not just deliver on it. Beyond that, the bigger picture counts: 23 per cent feel it’s important to demonstrate evidence of the economic and social benefits of projects.

Interestingly the wider social and economic impact was valued most highly by younger members of the profession, with 30 per cent of 18-to-24-year-olds selecting it. By contrast, one-third of 45-to-54-year-olds prefer the strategic impact on organisations as a more telling metric.

For the profession to grow its impact and influence, it will need to incorporate a whole range of skills and tools, from the latest technology and working practices to the adoption of a more diverse and inclusive recruitment policy to ensure it delivers value not only through the projects it delivers, but also to the wider set of stakeholders by encouraging long-term planning and investment in skills. 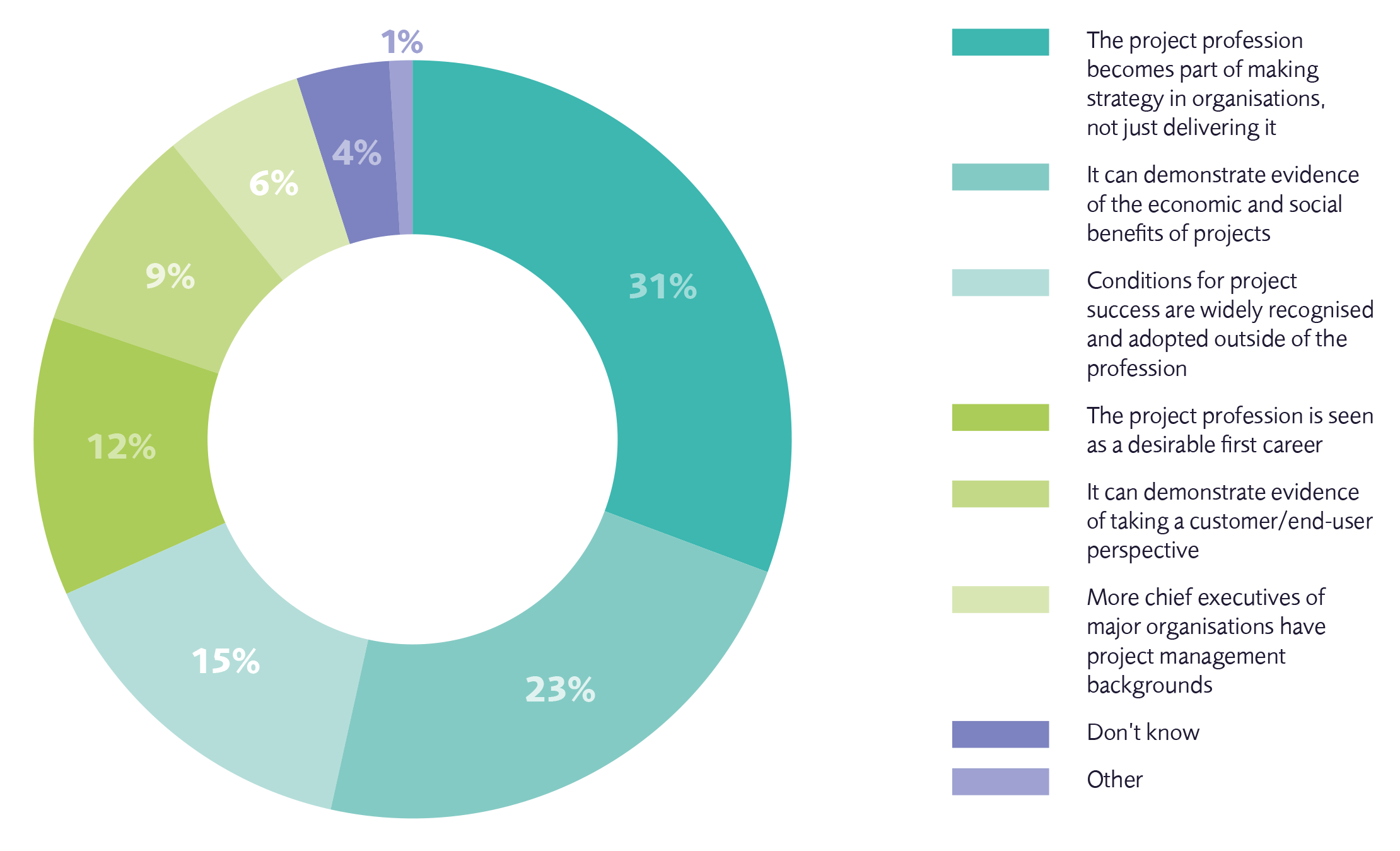 Skills will need to adapt and evolve to ensure the project profession remains ready for the challenge. And in an environment characterised by disruption and an accelerating pace of change, it’s not surprising that those on the ground value leadership and people management skills most highly.

In fact, 37 per cent of those surveyed ranked people management and stakeholder engagement as the most important, followed by project leadership (31 per cent ranked this first). That cuts across all age groups, sectors and employment models.

Perhaps reflecting the increasing ease with which technology is already incorporated into project work (and in particular how prevalent automation is becoming), the value of digital skills is actually falling. While 42 per cent of those at the early stage of their career anticipate the management of automated systems to become a more important requirement of their role in the coming years, almost half of all respondents (49 per cent) believe digital and data skills to be the least important in the future skills mix.

That may reflect the growing belief that effective delivery of projects cannot be outsourced to technology and that softer skills of leadership and delegation are paramount. 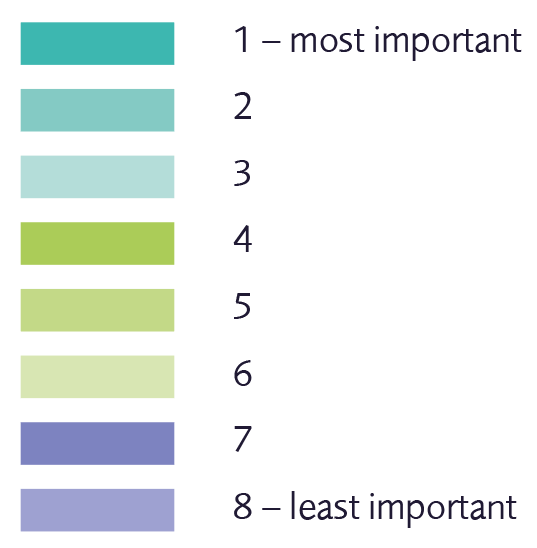 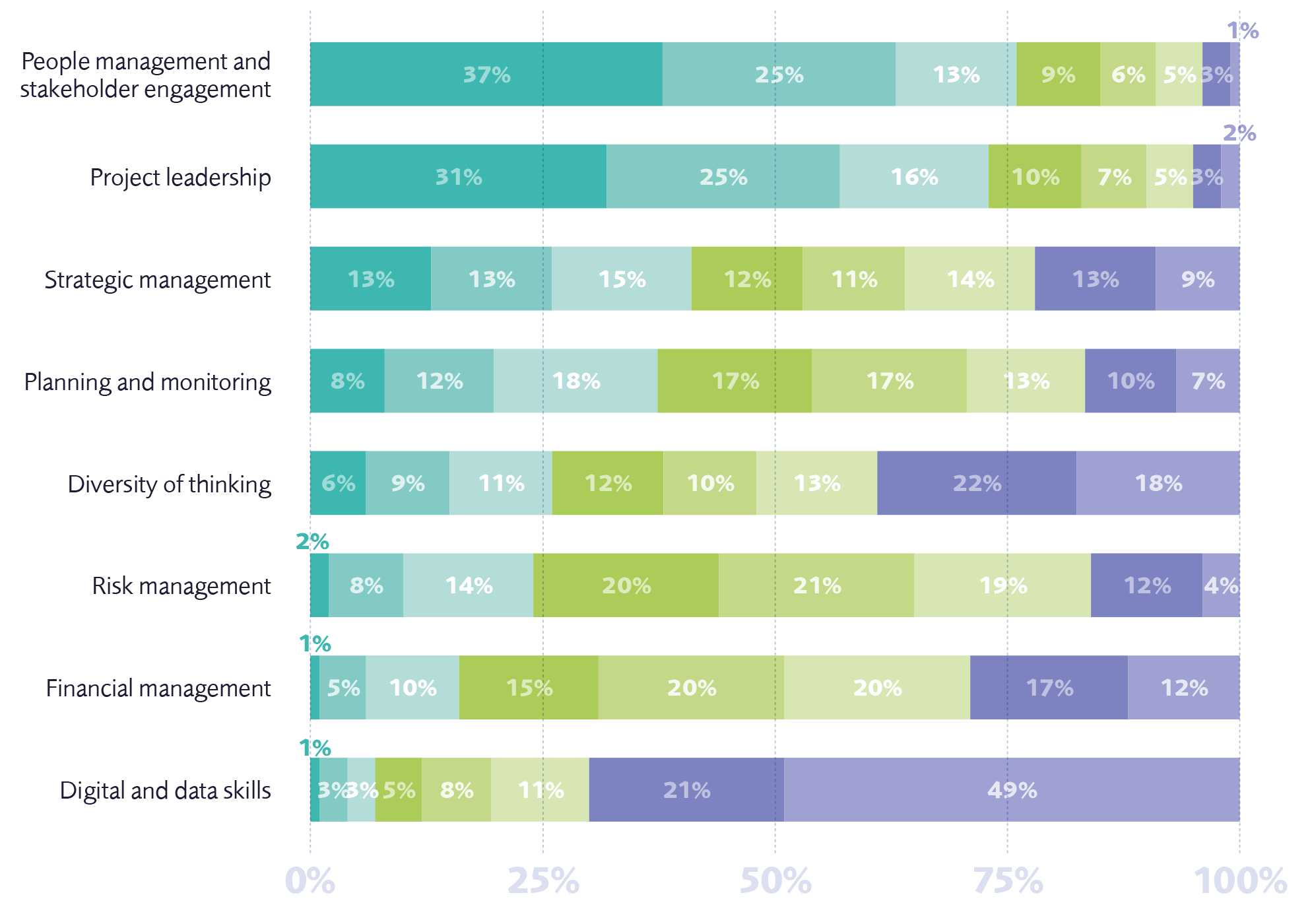 The revolution will be project managed

Unsurprisingly, technology and its impact continues to dominate the future agenda for project professionals. Last year, 87 per cent of those surveyed identified technology as the number-one force impacting the way projects are managed.

For some, technology represents a threat not only to the status quo, but also to their own roles, with fears over redundancy in the face of growing automation. For others, using automated systems and augmenting decision-making through the use of data analytics and AI opens up a brave new world (and more potential career paths).

Automation is viewed especially favourably, particularly among younger respondents, 75 per cent of whom hold a positive view of its impact, expecting it to free them from mundane tasks and drive more job opportunities. This is interesting, given some of the concerns expressed elsewhere. As our recent Projecting the Future research highlighted, as many as 15 million jobs could be lost to automation in the UK over the next decade. However, many are optimistic that many new, more interesting jobs will replace them.

For the profession, the implications are widespread and prompt a number of questions.