Our research paints a picture of a profession full of confidence prior to the COVID-19 pandemic. That confidence centred mainly on the prospects for the profession: optimism around the pipeline of projects, pay levels and that the jobs market was healthy and moving in the right direction.

There are differences by region, age and sector as we would expect. But overall the picture was hugely positive, as employers continued to prioritise the better use of technology, more flexibility in the workplace and competitive pay and benefits to attract and retain the best and brightest. 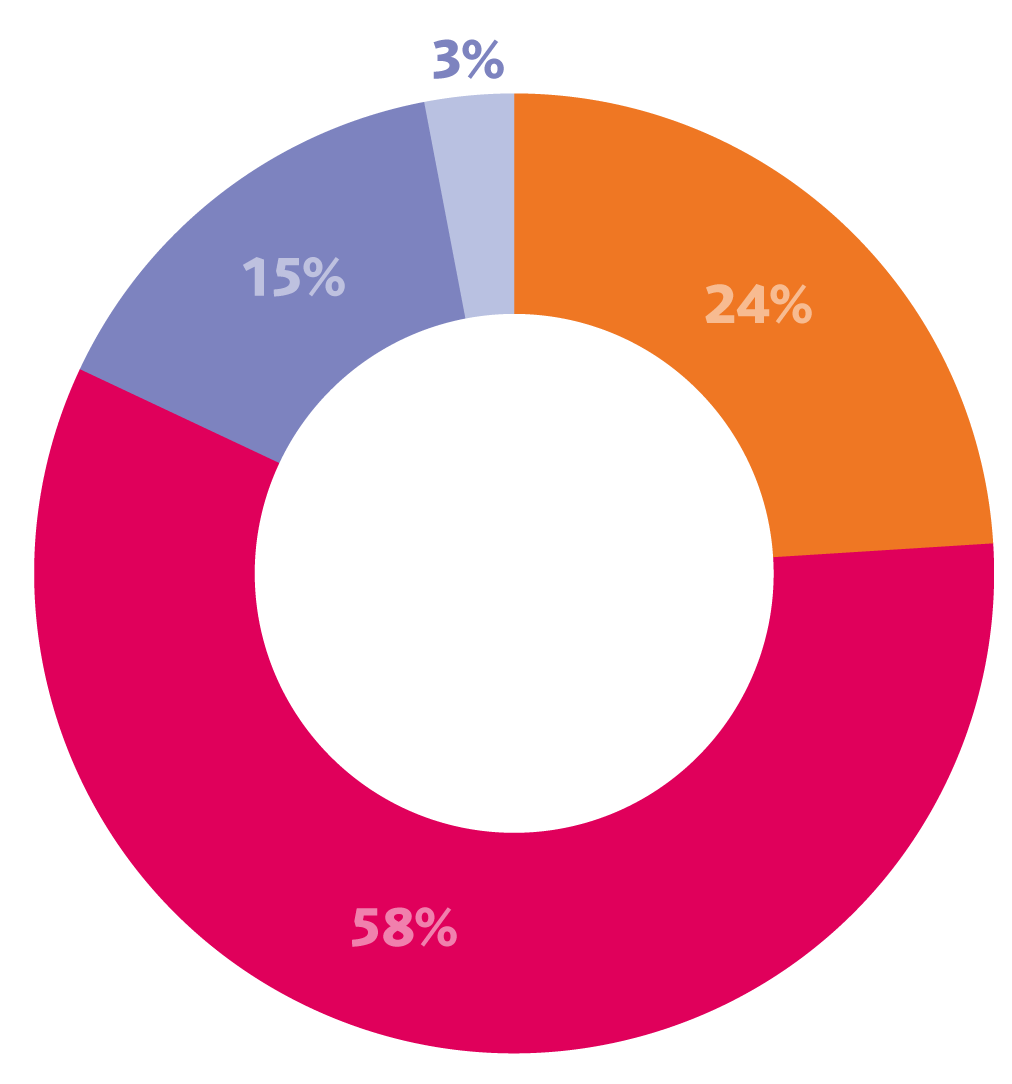 It is very encouraging that for most project professionals the job is a fulfilling one. And that sense of satisfaction is also affecting the levels of confidence among those working in the sector. That is especially pronounced in numbers expecting their pay and benefits package to improve in the near term. Seventy-two per cent of respondents said they expect to see an increase in the next 12 months. That compares favourably to the 66 per cent who said the same two years ago. Those working full-time (74 per cent) are generally more optimistic about their compensation in the coming year than those on temporary or interim contracts, while those in the legal sector (92 per cent), consultancy (81 per cent) and aerospace (79 per cent) are the most optimistic. 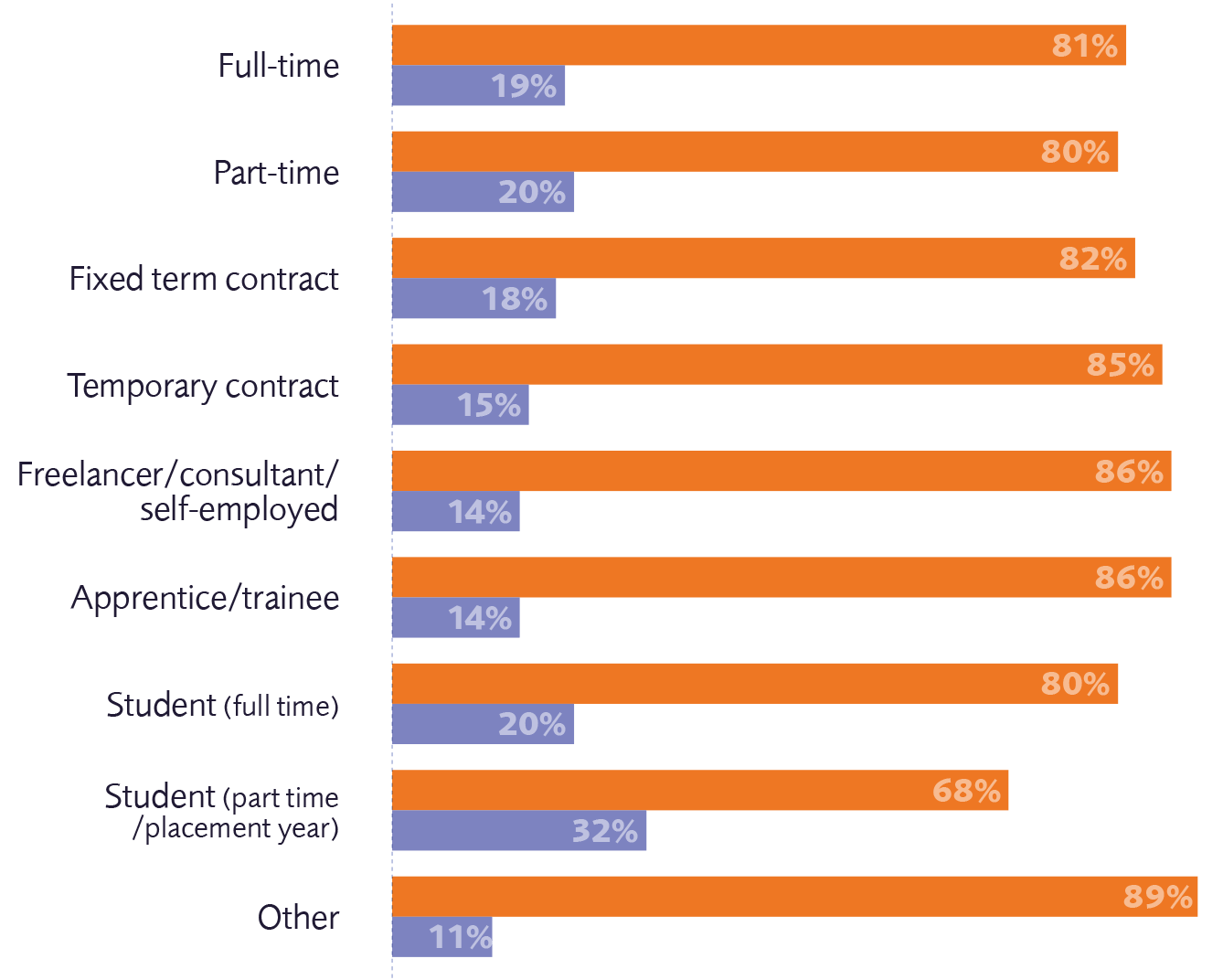 It is very encouraging that for most project professionals the job is a fulfilling one. And that sense of satisfaction is also affecting the levels of confidence among those working in the sector. That is especially pronounced in numbers expecting their pay and benefits package to improve in the near term. Seventy-two per cent of respondents said they expect to see an increase in the next 12 months. That compares favourably to the 66 per cent who said the same two years ago.

Those working full-time (74 per cent) are generally more optimistic about their compensation in the coming year than those on temporary or interim contracts, while those in the legal sector (92 per cent), consultancy (81 per cent) and aerospace (79 per cent) are the most optimistic. 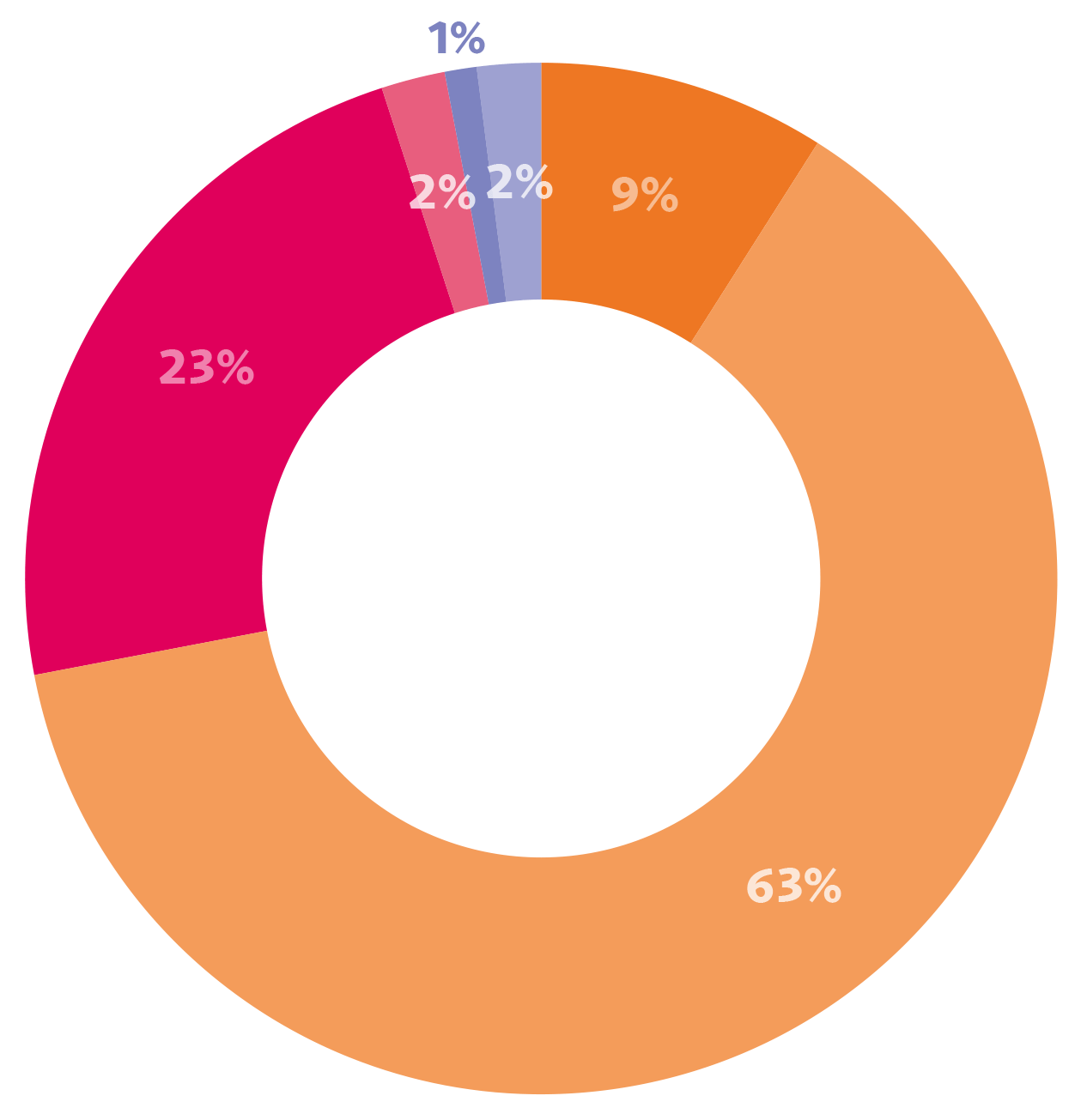 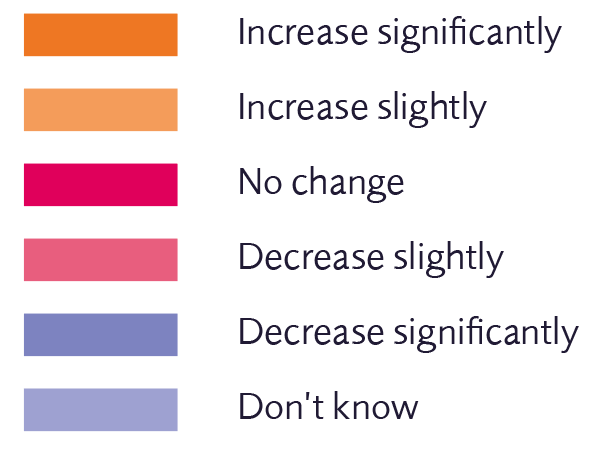 Project management has always been a dynamic profession, with movement of professionals between roles, sectors and regions. And it’s clear that a growing number of those surveyed feel confident that the prospects for the job market will improve in the coming year.

In fact, 83 per cent of project professionals pronounced themselves optimistic about the supply of jobs. When compared to last year’s figure of 77 per cent, this is an interesting result: increased confidence in the jobs market often translates into more movement between roles.

Optimism does split into certain sectoral patterns: respondents from health (77 per cent), agriculture (76 per cent) and local government (78 per cent) are among the least positive on the state of the jobs market, with optimism levels highest in business services, legal and the space industry.

Supply of jobs by sector 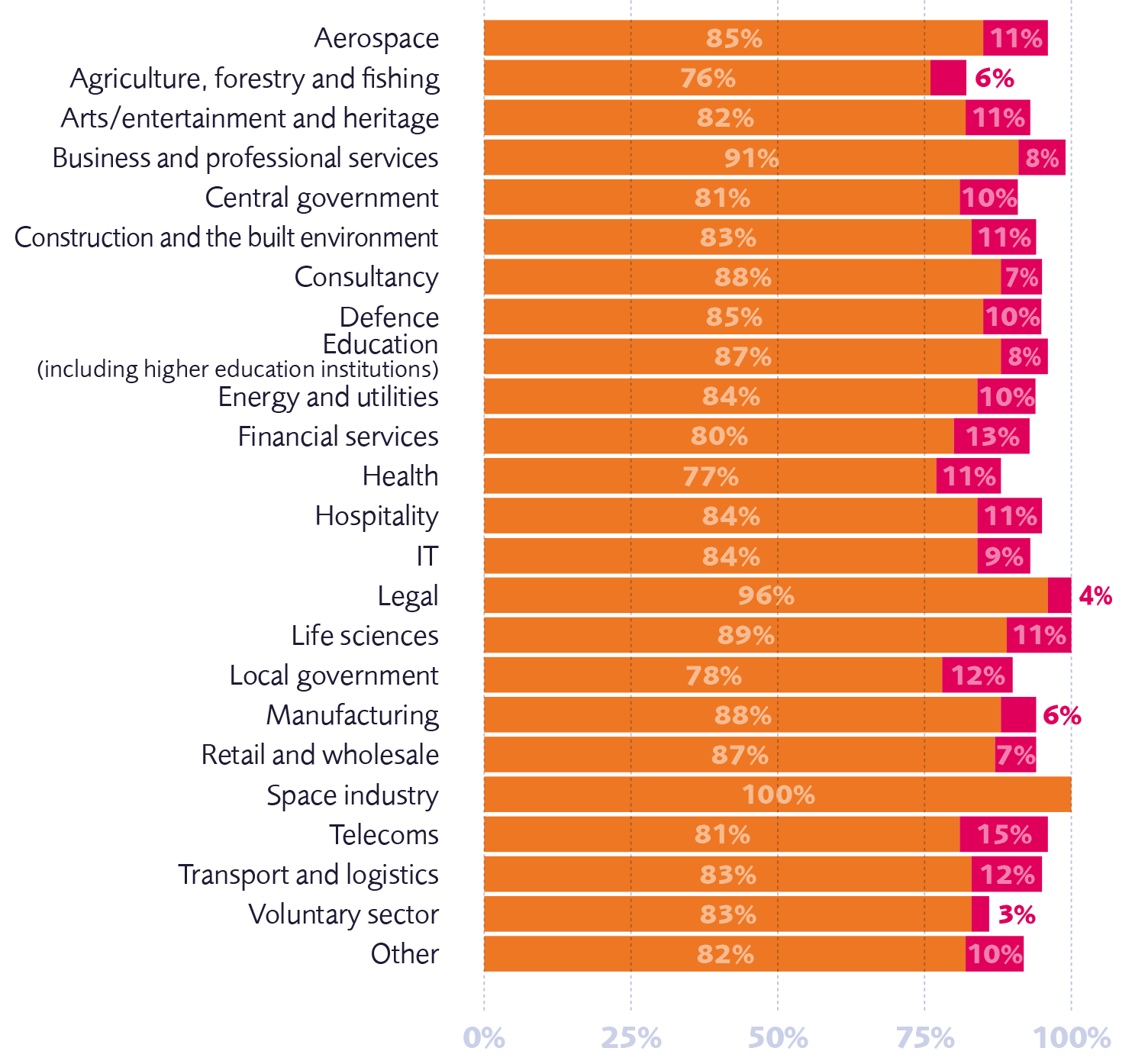 With 58 per cent of respondents feeling positive about the economic prospects for their employer, project professionals illustrate that optimism remains high. For the third year running, research shows organisations are hiring and growing as the economy improves, with over half (51 per cent) saying their organisation is looking to add headcount, an encouraging increase on the 49 per cent who reported it last year. Meanwhile only nine per cent say their organisation is anticipating a downturn and redundancies, compared with 11 per cent last year. 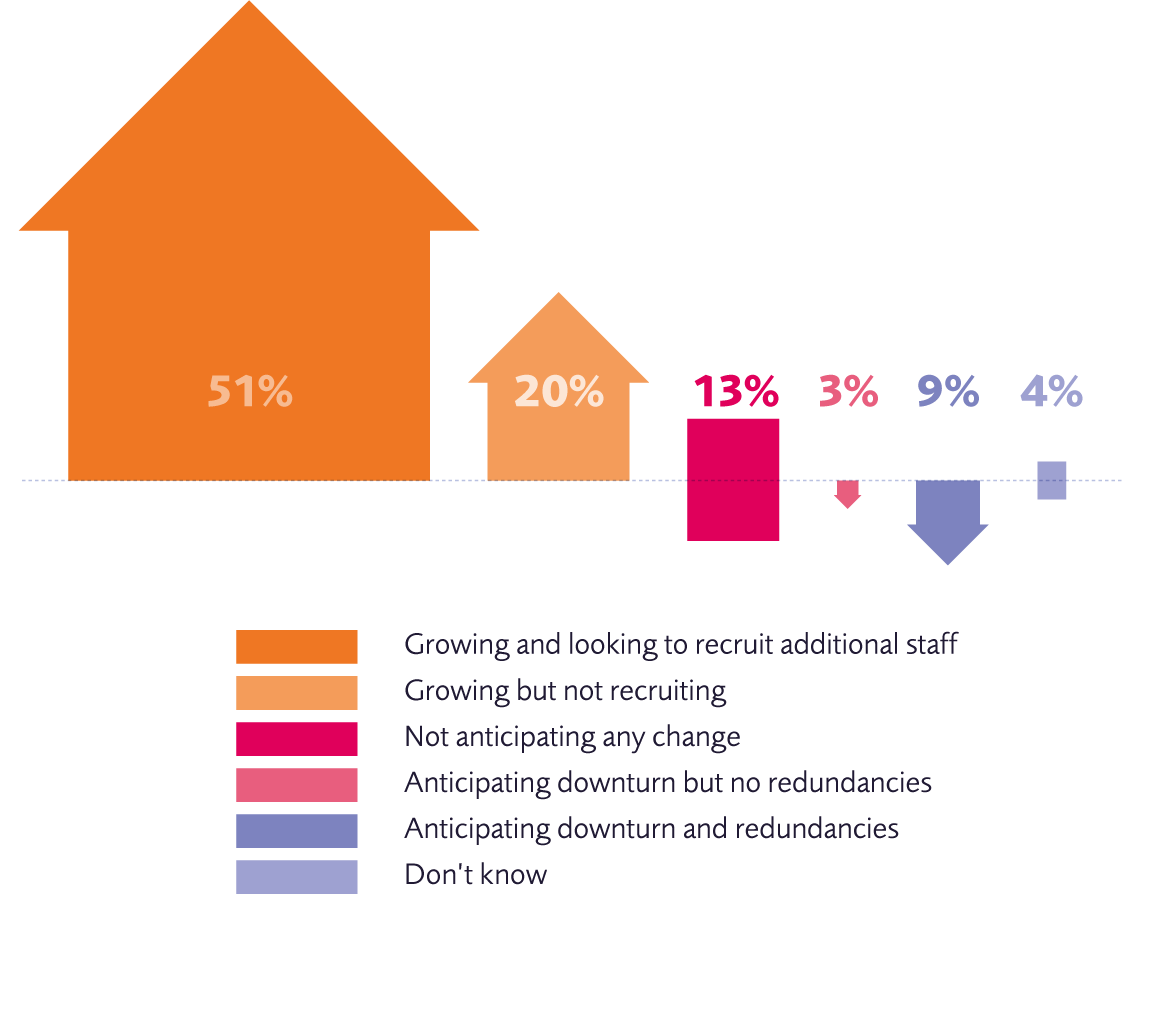 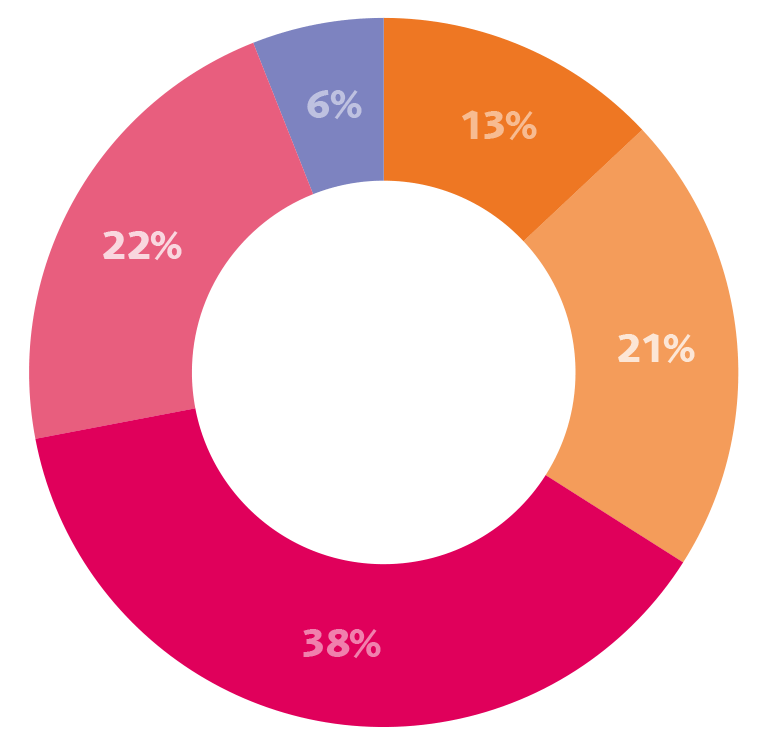 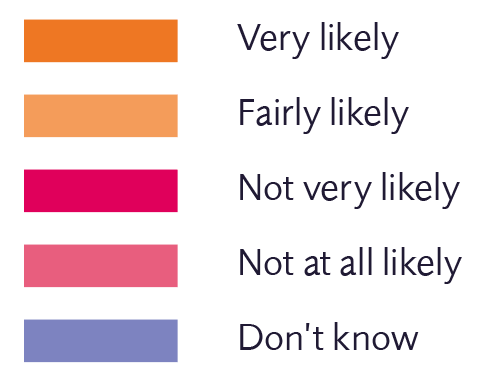 Confidence in the economy in general, and the profession in particular, is typically a good condition for a more dynamic job market, as professionals tend to transfer their valuable skills between employers keen to pay higher salaries.

However, the research shows the willingness to move jobs hasn’t changed from the previous year, with around a third of those surveyed (34 per cent) saying that they are likely to change employer in the next 12 months, whereas three-fifths (60 per cent) are unlikely to do so. Those aged 45-to-54-years-old are the least likely to change jobs, suggesting that this age group has the least to gain from changing employers.

London represents the most dynamic UK job market. Forty-three per cent of those currently working in the capital say they are likely to consider a move in the coming year, which is in contrast to the rest of the UK. Outside the UK, there is a near even split between those thinking of looking for a new role (45 per cent) and those who are not (49 per cent), perhaps reflecting the mobile nature of professionals in the international jobs market. 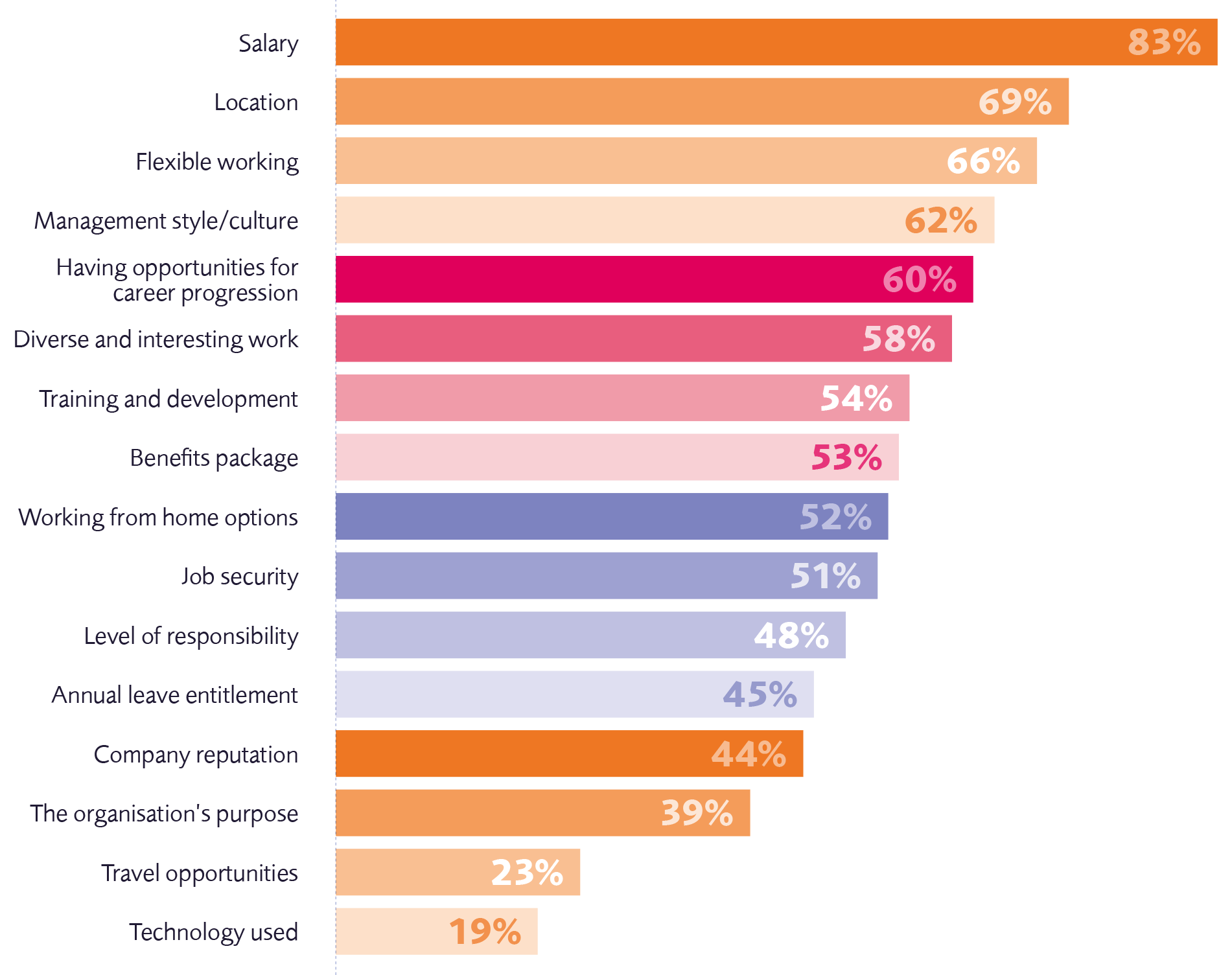 The question of pay is likely to feature highly on the list of answers given by job seekers. So, it is hardly surprising that salary is important to 83 per cent of project professionals looking for a new role. However, a number of other trends appear to be emerging.

For example, younger people value the opportunity to progress as much as salary. Eighty-two per cent of new entrants to the profession (those aged between 18 and 24) say they focus on career prospects ahead of location (67 per cent), which is only just behind salary (87 per cent).

In a generational shift that is reflected in other professions, those under 45 years of age are more likely to focus on flexible working, with over two-thirds of 35-to-44-year-olds selecting it as an important criterion. For employers there is now a growing need to offer careers that allow professionals to meet work, family and other commitments – the significance of flexible working as a driver of recruitment and retention is clearly increasing.

Encouraging talent into the profession 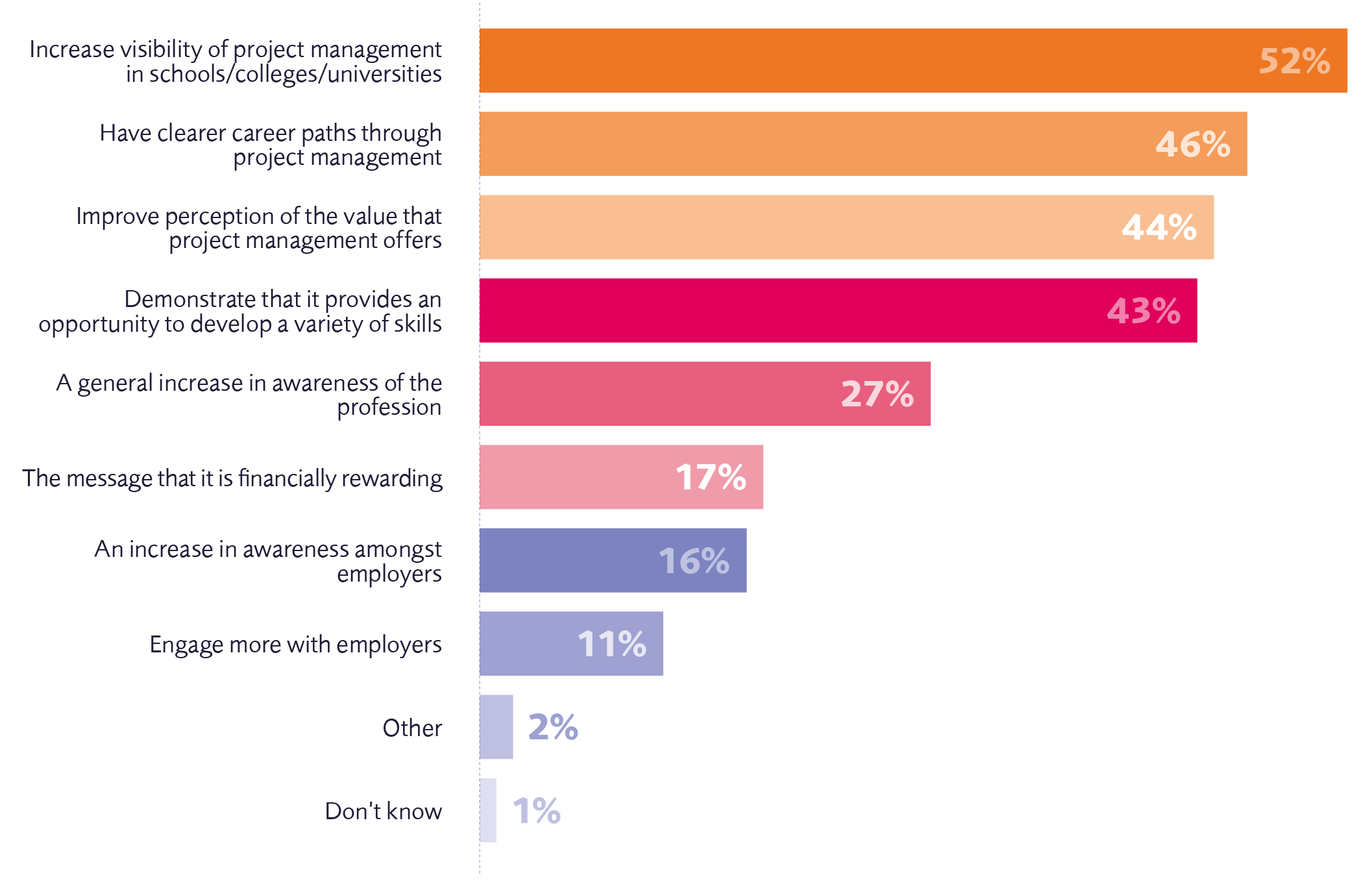 The issue of attracting talent into the profession generated a varied response. For most, getting the attention of potential recruits early was important, as more than half (52 per cent) said the key lies in improving the visibility of the profession in schools and universities.

It seems that demonstrating a project’s value has become a less important metric, with only 44 per cent citing it as an effective recruiting tool, down from 50 per cent last year. It may be that this reflects the growing interest in purpose as a corporate goal, going above and beyond simple economic value.

Project professionals are increasingly confident about their own career prospects.

Sixty-five per cent now say they rated the economic prospects for themselves over the next 12 months as excellent or good, compared to 56 per cent who said the same last year.

That optimism is shared across all age groups, with those at the younger end of the scale especially positive (81 per cent net positive among 18-to-24-year-olds). And that theme continues into the way respondents feel about their organisations, with 58 per cent confident in their company’s prospects, up from 47 per cent the previous year.

Regional variations do apply: Northern Ireland has the least optimistic workforce, with only 50 per cent believing their organisation will thrive in the short term. Project professionals working for organisations outside the UK are the most positive (67 per cent).

The profession’s view of the wider economic picture remains less rosy, with just 29 per cent declaring themselves optimistic for the coming year. While this is up from 23 per cent last year, many project professionals believe that, despite economic uncertainty, their own career prospects remain healthy. 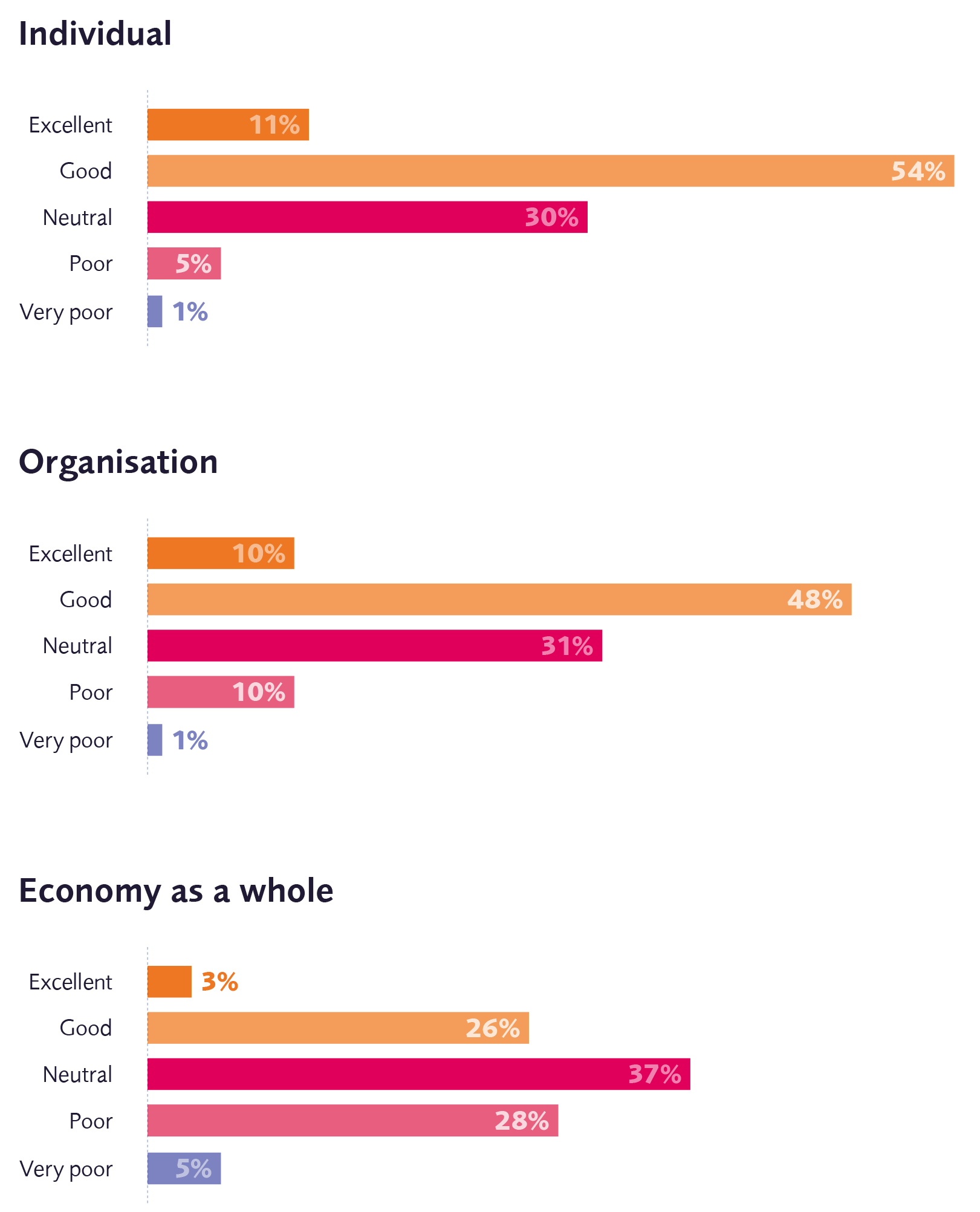 Future of the profession

The project profession is in competition for talent, resources and attention. But for those working in it, the belief that the profession will be enhanced in the next five years continues to strengthen. With stronger economic optimism and greater belief in the pipeline of work, 69 per cent say the profession is most likely to be enhanced over the next five years, up from 65 per cent the previous year, with a net increase on the positive figure of five percentage points to 66 per cent. 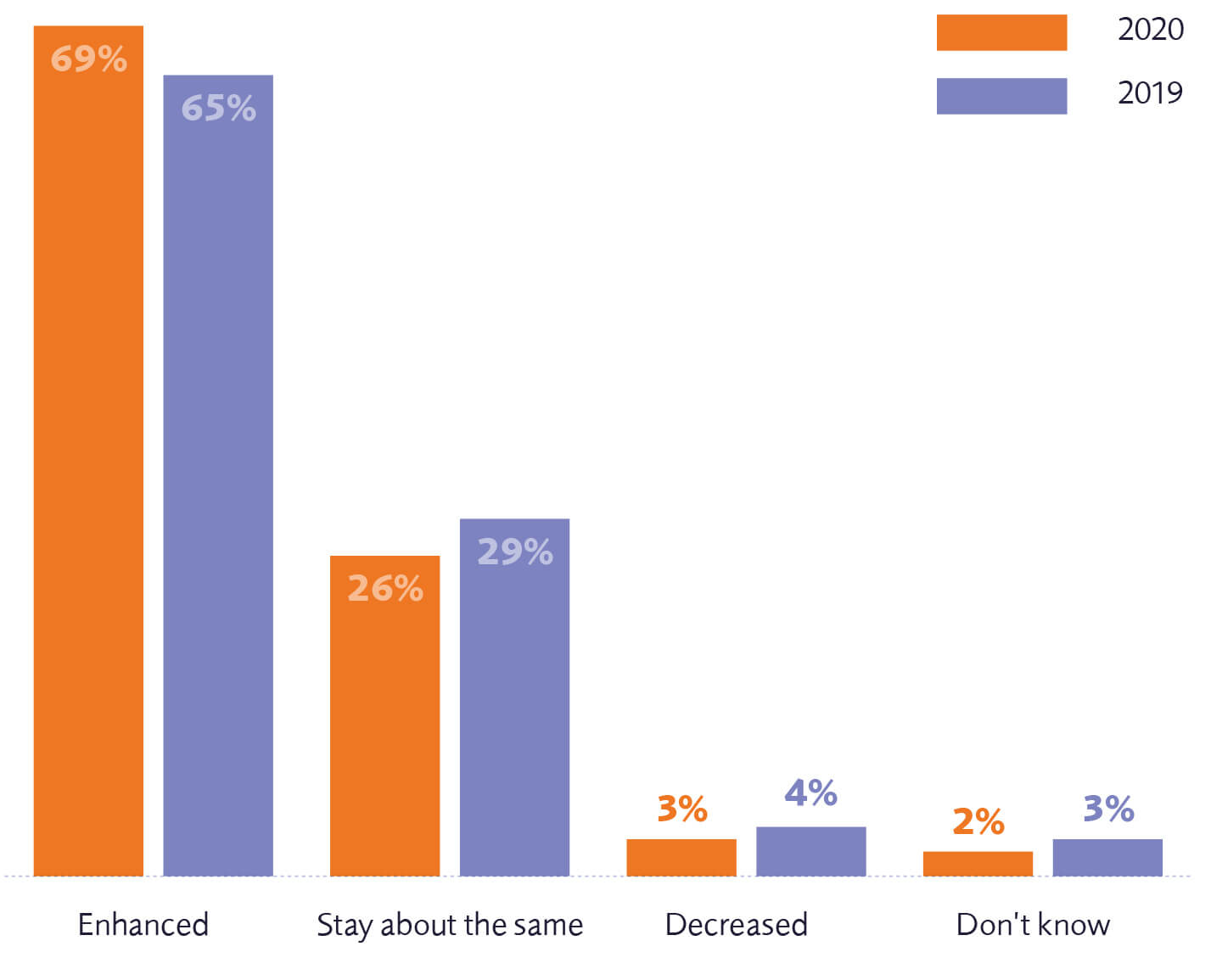