My bags were packed. The boarding passes were printed. Everything was ready to go. I was off to New York to run the kick-off for the biggest programme of my career to date, with people travelling from all over the world. What could possibly go wrong?

The date on my boarding pass was the 13th of September 2001.

Two days before that, 9/11 happened. Nobody could travel. In the end, we were grounded for three months. But of course my programme still had to go ahead, and so I had to do it in a different way. I had to do it virtually. It was like being thrown in the deep end. Luckily for me, it worked. That started off a whole new way of working. Now, sixteen years later, many more people work on projects and programmes with virtual teams spread around the world and my virtual skills have come a long way from those early beginnings. The core remains the same though, even years later and it’s focusing on the people above than the tools I’m using.

I find that project and programme managers in virtual situations often focus on the technology rather than the human side. But really, there's so much more to virtual projects and programmes than just technology. In fact, as long as your technology works, your focus needs to be elsewhere: on building your teams, running engaging sessions and working well together asynchronously (when you’re working at different times to others). In this blog post, I’ll focus on some ideas for running engaging live sessions.

It’s important that your programme virtual meetings are engaging for stakeholders and team members, as well as having good content. In a recent Programme Management SIG meeting, we had a lot to get through. But we spent some time at the start waving to each other on video and complementing someone’s red headphones and someone else’s décor. It wasn’t about the content of the meeting, but it was an important way to be together ‘face-to-face’ (via video) and to connect at a human level. Those connections will stay long after the events we were planning that night have been and gone.

Another way of engaging people is very rarely used, but it’s very effective. It’s drawing live on a shared screen during virtual meetings. I use live visuals and graphics on the screen so that, as people are watching, they see things changing, they see highlights added and they keep watching, curious to see what will happen next. Simple pictures express what I say in a way that keeps people glued to the screen. They are much less likely to be dragged away by social media, Facebook or their e-mails!

I used drawing in a webinar for the APM a couple of years ago.

At the end, the organiser told me that something rather odd had happened. Normally, as a webinar starts, more and more people join, but then people start leaving and the curve carries on downwards, even though the webinar is still going. With mine, it went to peak of about 205 people, quite quickly, but, instead of dropping off, it carried on at that level. And by the end of the hour there were still 200 people on the line! The organiser had never seen that before despite running webinars for years. She was flabbergasted.

Another human aspect to use virtually is your voice. Draw people in, engage them with stories and speak powerfully. Your voices provide powerful human connection across technology. Make sure people can hear each other really clearly, without background noise. There is nothing worse than being drowned out by “The next train from platform 9 is the fast train to Waterloo” or, even worse, the sound of a loud flush!

As project and programme managers, I would hope that my next point would come naturally: make sure that everything is clear for your participants. Your voice should be clear, but so too should your structure: What are we here for? What will we do today? What’s happening when? Who is doing what? How will we work together? What happens next?

People aren't machines. Keep this in mind as you run your next project or programme virtual meeting. Your team members and stakeholders are human beings, with hearts and souls as well as brains, so use everything you can to make your sessions as engaging and interesting as you can. Make time to build human connections and engage people with live drawing, your voice and clarity to make virtual sessions work for you. I first learnt this in 2001 and use these every day in my own professional practice. All the best! 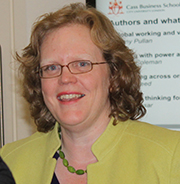 Dr Penny Pullan’s latest book is ‘Virtual Leadership: Getting the best out of virtual teams and virtual work’. She serves on the committee of the Programme Management SIG (past chair) and she's a former Women in Project Management SIG co-chair. You can connect with her on Twitter @pennypullan or via her company www.makingprojectswork.co.uk