Members of Association for Project Management’s leadership team travelled to COP26 to meet with senior business officials and project experts, to represent the profession as it leads the way in the battle against climate change. 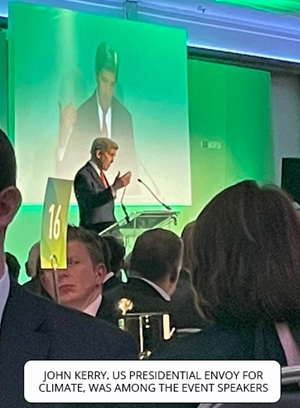 With the world’s attention focused on the climate conference in Glasgow, APM’s chief executive, Professor Adam Boddison, and director of membership, Rebecca Fox, travelled to Scotland for an official dinner organised by the Confederation of British Industry (CBI). Satbir West, APM’s partnership development manager, was also among the delegates. Together, the three represented APM at COP26 and opened new lines of dialogue with business leaders whose organisations are working towards net zero.

The project profession is already playing a vital role in preventing and mitigating the effects of climate change. At the highest level, projects are enabling industries and governments to switch from fossil fuels to renewables. But there are important projects taking place within schools, communities and in people’s homes that are all making a positive contribution.

Helping decision-makers realise the power of projects to deliver positive benefits to society was an important goal for APM attending COP26.

Rebecca Fox explained: “We were joined at the CBI dinner by our corporate partners, local branch members and accredited training providers. We met with a diverse range of people from the business community. The event was about business and governments working together to achieve  net zero in terms of finance, strategy and policy.

“A lot of people have said this year’s COP has been particularly successful due to the number and scale of commitments from so many countries. These commitments must be followed through. The project profession has a key role to play and is stepping up to the challenge.” 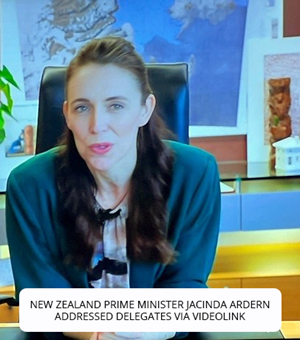 The CBI event hosted several influential speakers from around the world, including New Zealand Prime Minister, Jacinda Ardern and US Presidential Envoy for Climate, John Kerry.

As well as the CBI dinner, APM’s itinerary at COP26 included meetings with NHS representatives and a networking event with APM Fellows Chartered Project Professionals based in Scotland. Climate change and the environment were central topics, but discussions were also held on how to encourage mentoring and volunteering in the profession, to support current and future project professionals.

Prof Adam Boddison commented: “We’ve heard a lot about ‘building back better’ in the post-pandemic world. This is an important question, but – with a global drive to reach net zero – we must go further and ask ‘how can we build back greener?’ There is an urgent need for action and projects will be at the heart of this. It was important for APM to be present at COP26 to ensure our profession is properly represented, so that those taking important decisions will put projects at the centre of their plans for change.”

In numbers: Climate change and the project profession

APM’s latest Salary and Market Trends Survey asked project practitioners for their views on the climate crisis and what action the profession is taking.

These findings and more are available in APM’s insight paper Future Trends: Facing the Climate Challenge along with in-depth analysis.