Charting the progress of APM webinars

Merv has been actively driving webinars on behalf of APM Benefits and Value SIG for ten years. Between November 2017 and February 2020, he organised the APM Benefits Management series, galvanising support for APM’s marketing campaign for benefits management.

The series opened with joint webinars with the Infrastructure and Projects Authority (IPA) marking the publication of the Guide to effective benefits management in major projects and the Project Delivery Capability Framework for civil servants. Merv and the SIG had been heavily involved in the creation and promotion of both.

On Thursday 12 March 2020 Merv spoke at APM Programme Management SIG conference in Birmingham. The spectre of lock-down was looming, so Merv proposed to significantly increase the number of virtual rather than physical events. APM Scotland conference the following week was cancelled and shortly afterwards the entire branch event programme.

Having previous organised the Effective Benefits Management series, Merv was well placed to fire up a response from APM volunteers. Merv called in some favours from his enormous network of renowned speakers, who would ordinarily charge for travel and accommodation and even a speaker fee.

The first of presentation by Jane Sparrow on the topic of Making remote working work – keeping productivity and an eye on well-being provided important know-how to members on coming to terms with overcoming the cultural challenges of working from home. Jane is an international speaker, whom Merv had previously recruited to speak at a ProgM SIG evening event and webinar.

Preparing for projects in a post-pandemic world series

From early April, in collaboration with Jonathan Norman, Knowledge Hub Manager at the Major Projects Association, Merv curated an eight-webinar lunch and learn series, titled Preparing for Projects in a Post-Pandemic World.

The MPA represents the largest and most successful organisations delivering projects, in UK, being the trade organisation that works with the IPA and whose members are responsible for most of the half-trillion-pound UK spend on infrastructure projects.

The speakers and thought-leaders, many of whom were dealing with their own lockdown situations, were willing to take part at short notice, and in several cases had to overcome the time-zone challenge - for example joining us from New Zealand around midnight. Special thanks go to Phil Driver Framing strategy when emerging from a crisis and Iain Fraser Managing your portfolio in a topsy-turvy world.

Merv and Jonathan, who are no strangers to the 5 P’s, namely 'proper planning prevents poor performance,’ carefully coached each speaker in the difference between the design and delivery of online versus in-person events. Web cams on was the order of the day. So, getting the event tech right was important including speaker web cams, backgrounds and lighting and audio - no excuses for ‘can you hear me’ or ‘you’re on mute!’.

This enabled our speakers and presenters, to improve their performance by using non-verbal communication, reduce the amount of slideware to avoid Death by Powerpoint and concentrate on delivering their key messages. Each session was repeatedly rehearsed, including some necessary pruning, to ensure that all content was relevant and interesting, and to check timings. From bitter experience, speakers are likely to take longer than they expect, and it is important to finish as per the webinar schedule!

Increasing the value of events?

Merv has been using Mentimeter interactive presentation software for APM in-person events since June 2017, starting with APM’s third Benefits Management Summit titled Realising benefits in a changing world and with co-facilitator, Neil White for a workshop titled ‘Our approach to developing a benefits management framework’ at the APM Portfolio Management SIG conference. (October 2019)

Since switching to on-line meeting and events, Merv has worked with many others to perfect the craft of using the Mentimeter platform to engage audiences, turning attendees into participants, and helping presenters to listen to what their audience has to say. A personal highlight for Merv, was a webinar with Johnny Warström, Mentimeter CEO titled Listening Leadership – the decade of talking is over, where most of the session was given over to a conversation between and the audience based on questions that poured in via Mentimeter.

The series culminated with a webinar titled Human potential: shaping the best new normal by Ruth Murray-Webster, editor of APM Body of Knowledge 7th edition. During this webinar with over 300 attendees, 160 of them used their Mentimeter voices to answer a broad range of questions such as “What image best sums up your organisation’s approach to scenario and resilience planning?’ and ‘For how much of your time could you work from anywhere in the future?’

Understanding the impact of the webinar series

The summary stats for the joint APM and MPA series speak for themselves.

With an average to 295 attendees per webinar and 147 individual Mentimeter voices (50%), the worldwide audience (as reported in the first question to the audience ‘Where in the world are you joining us from today?’ were clearly highly engaged. However, we know that what really matters is what the audience do as a result of attending. See article on this topic titled How Mentimeter increases the value of webinars (November 2018). 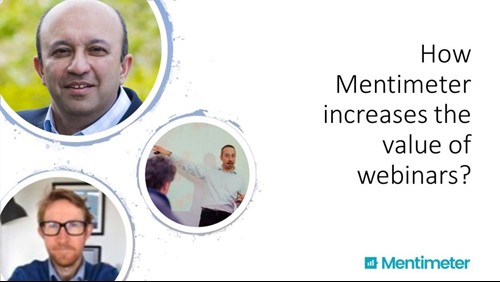 In each webinar, the audience provided valuable feedback in response to the reflective practice/killer question’ what have your learned or what will you do as a result of attending the webinar today?’ This question is closely linked to level 3 (behaviour) of the Event ROI Methodology.

Merv argues that the act of simply providing input/articulating a response increases the likelihood that an individual will follow through on their intention statement, i.e., to carry out something that they said they would do. See ‘Change behaviour if you want to create value from events' (APM, May 2012)’.

Jonathan Norman (MPA) said ‘The webinar series offered an eclectic look at the what the world may require of our projects and of us, once organisations start to function with some degree of normalcy.

We brought you some of the most imaginative and engaging presenters, expertly facilitated by Merv Wyeth and I, and we used the Mentimeter engagement tool to provide as great a level of audience participation and dialogue as is possible’.

Leading by example – the webinar show goes on

Whilst the series filled an immediate lockdown-gap, it also set a benchmark for other SIGs and Branches to follow and created an expectation with APM members and followers that there would be a consistently high-quality webinar every week.

In June, giving way to APM’s flagship Power of Project Takeover annual conference, Merv and the members of Benefits and Value SIG throttled back production, to enable other SIGs and Branches to take their turn.

Even so, many of the speakers were introduced to the webinars and to the relevant SIG by Merv. He provided coaching to other Benefits and Value SIG colleagues about how to make speakers feel comfortable and distil audience questions from the mass of text that comes through to a webinar host!

In the importance of benefits management, the speakers outlined the Yorkshire Building Society (YBS) practices, successes and challenges that they had experienced on their journey to creating a benefits-led approach to their change portfolio.

The importance of benefits management – Yorkshire Building Society, May 2020

On Tuesday 1 December, Merv teamed up with Petula Allison, co-Chair of APM Portfolio Management SIG, also from YBS to jointly deliver a webinar titled An introduction to the theory and practice of portfolio management covering the key principles, themes and processes with several case studies. In this case the Mentimeter presentation was tightly integrated with the 2020 APM Portfolio Management SIG survey, last conducted in 2015.

In 2021, Merv and his colleagues from Benefits and Value SIG continue to work with other volunteers to design and deliver webinars. This has included working closely with APM Thames Valley Branch (TVB).

Greg Krawczyk, Events Manager for TVB says: “Merv has been instrumental in supporting TVB’s aspiration to improve our digital events product. Following his advice, we recently utilised Mentimeter during an event and 35 attendees resoundingly told us they want to see more online engagement of this type (4.6 out of 5). The ROI for making events more engaging and improving the quality of presentations couldn’t be clearer.”

Merv is the APM Benefits and Value SIG Secretary, a APM Portfolio Management SIG committee member, and an APM fellow.

With a first career in policing, Merv has twenty-plus years’ experience in business change, programme management and benefits-led portfolio management. He is the UK delivery partner of Amplify™ strategy execution software.